The Pectoral Sandpiper, Calidris or Erolia melanotos, is a small wader. The “Cox’s Sandpiper” (“Calidris” × paramelanotos) is a stereotyped hybrid between this species and the Curlew Sandpiper. It breeds in the boggy tundra of northeast Asia and North America. It is a very long-distance migrant. The American and most of the Asian birds winter in South America, but some Asian breeders winter in southern and Australia and New Zealand.

This species occurs as a regular migrant to western Europe, and is not classed as a rarity in Ireland or Great Britain. Many of the birds occurring in Western Europe may be on a regular migration from Asian breeding grounds to winter in Southern Africa (Lees and Gilroy 2004). September 2003 saw a record influx to those two countries, with 40 found in Ireland, and 150 in Great Britain. On migration and in winter, the Pectoral Sandpiper is typically found in fresh water habitats.

While Pectoral Sandpiper has not been recorded as breeding species in Europe, it has been found in Scotland in suitable breeding habitat in summer (Alan Vittery, 1997, The Birds of Sutherland).

This species nests on the ground, laying four eggs. The male has a display involving puffing up his breast, which has a fat sac in the breeding season to enhance his performance. This bird is similar to its relative, the Sharp-tailed Sandpiper, which breeds entirely within the Pectoral’s Asian range. It is a largish calidrid, with a grey-brown back, brownest in the summer male, and greyest in winter. It has a grey breast, sharply demarcated at its lower edge, which gives this species its English name. The legs are yellowish.

The juveniles are more brightly patterned above with rufous colouration and white mantle stripes.

This species differs from the Sharp-tailed Sandpiper in its breast pattern, weaker supercilium (line above eye) and greyer crown. These birds forage on grasslands and mudflats, picking up food by sight, sometimes by probing. They mainly eat insects and other invertebrates. 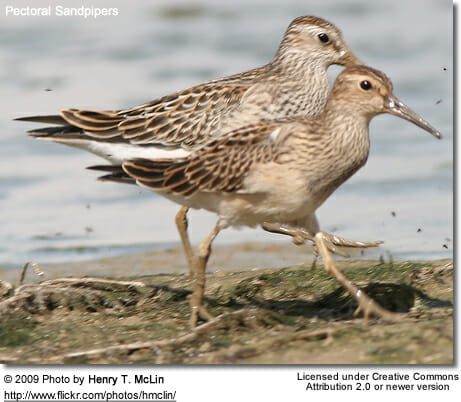