The Peruvian Booby, Sula variegata, is an endemic bird of the Peruvian current whose distribution is restricted to the west coast of South America from Punta Pariñas (4.6°S) in Peru to Concepción in Chile (Harrison 1988).

ENSO 1997-98 started after most boobies finished the breeding season and caused a southward migration of birds. The number of Peruvian Boobies in Peru decreased through 1997 in about 87.1% due to this reason, few birds were found dead along the coast.

Peruvian Boobies breed throughout the year. Main breeding season occurs during the austral spring-summer period (September to March) and most pairs may attempt to breed for a second time during the year depending on food availability.

Peruvian Boobies clutch size varies from one to four eggs, but clutches of two or three eggs, pale blue in color, are usually found. Eggs are incubated during approximately 4 to 5 weeks, both adults share the nest attendance.

The rearing period lasts about 3 months. Breeding success depends on food availability and is related to colony location, colony size and timing of breeding. 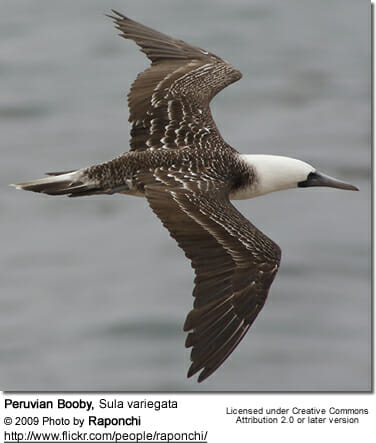