Main Article: Hand-raised or Parent-raised: Which Is Better For The Birds? by Jeannine Miesle M.A., M.Ed.

So what are the consequences of hand-raising chicks? Because these birds were raised in an unnatural manner, they “never developed an appropriate sense of self.” 2 Pulling the eggs, artificially incubating them, and hand-feeding the chicks result in birds which have imprinted on humans instead of other birds. Even if they are allowed a few weeks in the nest before being pulled, the result is almost the same. The imprinting is not quite the same as it is with the artificially incubated chicks, but very close. Consequently, these birds “often have a human self-orientation, leading to the development of an abnormal human‐bird bond.” 2

According to A. Gallagher, There is a specific window of time during which birds learn initial, social developmental skills. They are learning how to be birds from other birds in the nest during this time. If this learning time is not permitted, and is instead replaced with abnormal human self-identification, it is essentially impossible to reverse. This bond produces many undesirable behaviors:

Some owners attempt to relieve the bird’s anxiety by obtaining another bird, but often neither bird has the skills needed for social interaction, so “they often appear to live like ‘two lamps on a shelf’ with no recognition of each other.” 2 Once this abnormal human-bird bond develops and problem behaviors begin, it is very difficult to completely eliminate them, but these behaviors can be modified with education and training. 2

10.2 The Connection between Hand-Rearing, Aberrant Behaviors, and Health Issues in Specific Species

There is evidence of a pathological connection between hand-rearing and aberrant behavior in adult companion birds. Any species may exhibit these unwanted behaviors, but the groups in which these are most often seen are the cockatoos, Amazons, and to a somewhat lesser extent, macaws. Behavioral disorders are most frequently encountered in the larger psittacine species, although they can be found in the smaller species as well. And although physical health issues are more commonly seen in the smaller species, such as the cockatiel, budgerigar and parrotlets as a result of hand-rearing, they may be found in the larger species as well. 2

Parental separation and hand-rearing affect the development of other behaviors. When first introduced to new objects, hand-raised birds did not display as much fear as parent-raised birds. However, this fear was only postponed. By the time the birds were a year old, both hand-reared and parent-reared birds, housed under similar conditions after weaning, reacted in the same way after being exposed to new objects. It’s possible that delayed maturation or “generalized exposure to new items” played a part in the difference. 12 Birds become less fearful of new things in their environment, indicating that they are sensitive to changes for quite a while after weaning; then they gradually adapt to new environmental conditions. “In the wild, this may aid them in decreasing the risks of predation or ingestion of toxic materials. It also may increase the chances that they’ll find new foraging sites, nest sites, or mates.” 12

As a result, parrots that dwell in frequently changing environments tend to be less fearful of new situations and objects than those that inhabit relatively constant, predictable environments. Birds in captivity display the same behaviors. When young birds are exposed to items that are new or frequently rotated and environments that are diverse, they have less fear of new places or objects. These findings emphasize the importance of regular rotation of toys and other enrichments; simply providing the enrichments and leaving them indefinitely is not stimulating for the bird. There must be frequent changes in their environments. However, we must be very careful when presenting new objects or housing to fearful birds; too many changes too close together can intensify the fearful behaviors. “Individual differences in reactivity to novel experiences must always be considered when providing enrichment opportunities or new environments to birds.” 12

Image 10A: This hand-raised African grey parrot on the left (Psittacus erithacus) was presented with a novel object, a child’s teething toy in the shape of a monkey. Although the bird did not panic, it was reluctant to approach this new toy. The reluctance to approach a novel object is referred to as “neophobia” (image courtesy Yvonne Van Zeeland, in Speer: Current Therapy in Avian Medicine and Surgery).:

Image 10B: This parent-raised African grey parrot (Psittacus erithacus) was presented with the same novel object as the parrot in Figure 6- A. Despite the fact that this bird had also never been in contact with the toy, it immediately approached this new toy and started to explore it with its beak and feet (image courtesy Yvonne Van Zeeland in Speer: Current Therapy in Avian Medicine and Surgery).

Hand-raised birds are also more prone to develop abnormal sexual behaviors toward humans. These include regurgitation, masturbation, courtship behavior, territorial aggression, sudden onset of phobic behaviors, excessive vocalizations, continued begging and whining for food (including delayed weaning), and feather-damaging behavior. “Many of these abnormal behaviors may develop as a result of frustration (e.g., inability to sexually bond with humans) or to seek attention from the caregiver. As such, they appear similar to the “orphanage syndrome” or “relative-attachment disorder” described in human children who have been deprived of affection and stability in their early childhood.” 12 Birds that are hand-reared are deprived of the necessary contact with other birds of the same species as well as with their parents and siblings. This contact with conspecifics is needed to establish normal social and sexual behaviors. 12 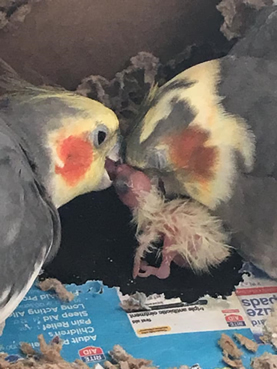 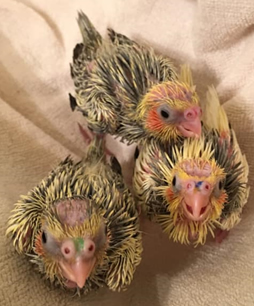