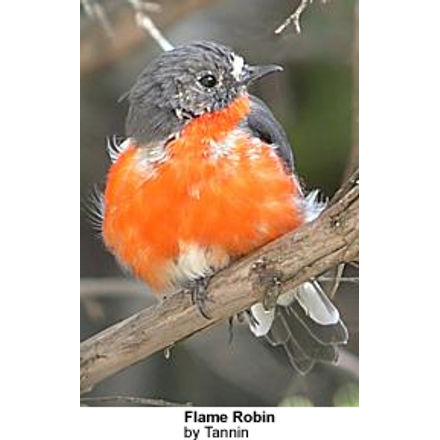 The bird family Petroicidae includes roughly 45 species in about 15 genera. All are endemic to Australasia or nearby areas. For want of a more accurate common name, the family is often described as the Australasian robins: it extends beyond Australasia, however, and includes not just robins but the Jacky Winter, the New Zealand Tomtit, some flycatchers, and scrub-robins.

Most species have a stocky build with a large, rounded head, a short, straight bill, and rounded wingtips. They occupy a wide range of wooded habitats, from subalpine to tropical rainforest, and mangrove swamps to semi-arid scrubland. All are primarily insectivorous, although a few supplement their diet with seeds. Hunting is mostly by perch and pounce, a favoured tactic being to cling sideways onto a treetrunk and scan the ground below without moving.

Nests are cup-shaped, usually constructed by the female, and often placed in a vertical fork of a tree or shrub; many species are expert at adding moss, bark or lichen to the outside of the nest as camouflague, making it very difficult to spot (even when it is in a seemingly prominent location).

The relationship of the Petroicidae to other bird families is uncertain. They are clearly part of a particularly old lineage. Sibley and Alquist’s DNA-DNA hybridisation studies put them in the “Corvoidea” (a huge group that includes the shrikes, crows and jays, butcherbirds, woodswallows, drongos, cuckoo-shrike, fantails, monarch flycatchers and many others), but this superfamily has been proven to be paraphyletic (= some, but not all, of the descendants from a common ancestor).

More recent allozyme studies suggest that they be placed with the Meliphagoidea – the superfamily that includes the honeyeaters, Australian wrens, Pardalotes, and thornbills and itself derives from the great Australasian corvid radiation.

Although the details remain uncertain, the overall picture is clear: despite the striking similarity between the robins of Australasia and the true robins of Europe, their evolutionary relationship is quite distant, and the Petroicidae are more closely related to the crows and jays than to the group of northern hemisphere birds which resemble them in appearance, diet, habits, and even coloration.