The jacanas are a group of waders (family Charadriidae) – identifiable by their big feet and claws which enable them to walk on floating vegetation in shallow lakes (their preferred habitat).

They are found worldwide within the tropical zone.

They are capable of swimming; however, they are usually observed walking on the vegetation.

The females tend to be more colorful than the males and are polyandrous (meaning they form stable unions with more than one male).

Its population is suspected to be declining due to ongoing habitat destruction and degradation (del Hoyo et al. 1996).

The Pheasant-tailed Jacana breeds around lakes, marshes and ponds in Pakistan, Nepal, India and Sri Lanka through Myanmar to southeastern China and Taiwan; south to southeastern Asia and Malay Peninsula, southern Borneo and Phillippines.

They winters sparsely south to Sumatra and Java, and also west to Oman and Yemen.

They are native to: 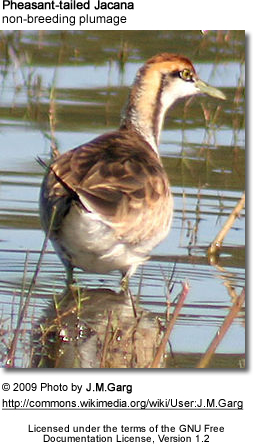 The Pheasant-tailed Jacana is the only jacana to have a separate breeding plumage, when it is a conspicuous and unmistakable bird. The male sports a long “pheasant”-like tail in the breeding season.

They are 31 cm (12″) long but the females are larger than the males. In the breeding season, the long tail adds another 8 cm. The outermost primaries (= longest wing feathers) have a spatulate extension of 2 cm and the seventh primary has a broad protrusion.

Breeding adults are mainly black other than white wings, head and fore neck. The hind neck is golden. There is a striking white eyestripe. The legs and very long toes are grey.

Non-breeding adults lack the long tail. The underparts are white except for a brown breast band and neck stripe. The side of the neck is golden.

Young birds have brown upperparts. The underparts are white, with a weak brown breast band.

Measurements (From Rasmussen and Anderton): 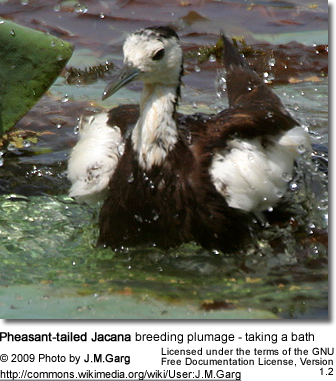 In the breeding season, the male grows the 15cm (6″) arching tail, to which the bird owes its name.

A female may mate with up to ten males, each of which incubates a clutch and raises his own brood. Four black-marked brown eggs are laid in the floating nests.

They nest on floating vegetation during March to July.

In southern India, it breeds in the monsoon season June-Sept.

The Pheasant-tailed Jacana’s food is insects and other invertebrates, picked from the floating vegetation or the water’s surface. They also take frogs and fish.

Their call is a mewing me-onp and a nasal teeun