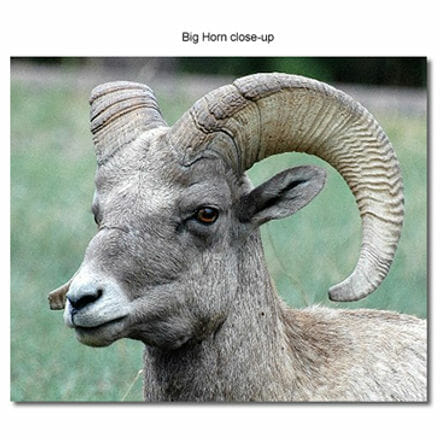 Wildlife watching is one of the reasons that people visit our National Park system.  While hundreds of species can be seen and enjoyed at these places, there are only a few that occur on the top of everybody’s want-to-see list.  This article will name ten of the most sought after species, plus information on habitat and behaviors, and when and where to find them.

Black bears can be found almost any where in the North American continent as long as there are forest  I have seen black bears in almost every state I have visited. Most of these sighting were because of long stays in an area or by chance sightings of one running across the road as I was driving.  If one wants a “positive for sure definite” sighting with black bears, then visit the VINCE SCHUTE BEAR SANCTUARY in Orr, Minnesota.  I have seen as many as 50 wild bears in one scene at this place.

Viewing tips for black bears is that they are most commonly seen in early morning or late afternoon.  They are primarily vegetarians so look for places with young tender shoots or in ripe berry patches or of course garbage dumps.

Interesting facts about black bears….despite their name …..can range in color from light cinnamon to a dark blue-black.  They weigh in at 200 to 500 pounds but I have seen them at 700 pounds.  If approached by a black bear, scream and yell and look as big as possible.  DO NOT RUN.

Brown bears, also known as grizzlies, are much less common on the North American continent.  It has been said that a few exist in Colorado…… a few are found at Yellowstone National Park and at Glacier National Park, however, for a “positive for sure definite” sighting, one has to go to Alaska.

Viewing tips for brown bears in Alaska ….. most river basins will have bears meandering their shorelines in search of salmonoid fishes.  They, too, enjoy vegetative matter, primarily berries, and enjoy the more open spaces of the tundra areas and sub alpine meadows.  They also can be seen anytime of day or night.

Interesting facts about brown bears are they can also be other colors, light brown to black.  They will weigh as much as 1500 pounds and as tall as ten feet when they stand on their back legs to investigate smells and sounds.  They also posses a hump over their shoulders and have long straight claws.  Treat with caution.  If approached, play dead.  Do not run.

There are many places to see moose in the United States.  The best known is Anchorage, Alaska, and the state of Maine.  Lesser known places are the Upper peninsula of Michigan, Northern Minnesota……The boundary waters, and Aggaziz wildlife refuge,  Oxbow bend in Teton national Park, and in Colorado…..between Arapahoe wildlife refuge and Rocky Mountain National Park.

Viewing tips for moose…..Moose are primarily seen in the very early morning hours and possibly at dusk.  Look for them in rivers, ponds, and freshwater marshy areas, where the majority of plant growth is willow thickets.  They can eat (browse) and hide at the same time.

nteresting facts about moose.  They are the largest member of the deer family in the world.  The can weigh as much as 1800 pounds.  For a clumsy  looking animal they can run fast (out run a man) and can swim very well ( up to 5 miles an hour).  Avoid confrontation with bulls during the rut and cows are overprotective when they have calves. 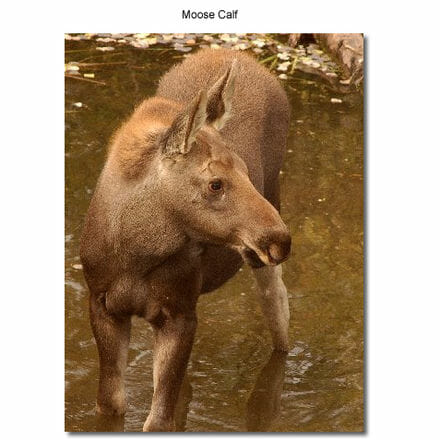 There are several places in the United States to see wolves but the most consistent place is around Yellowstone where they were reintroduce several years ago.  They can also be seen in the Upper Peninsula of Michigan and Northern Minnesota in the lower 48.  Alaska has several places including the Brooks Range and Denali.

Viewing tips for wolves: They are the largest member of the wild canids in North America.  They are most easily distracted in February because that is breeding season for them and they tend to throw caution to the wind..  May through August, they tend to stay close to their den, as it is  rearing time for the new litter.  ( If truly interested, go to Ely, Minnesota, and join the International Wolf Foundation……They are a big help.  They can also provide information on the Red wolf reintroduced and found only in Eastern North Carolina, and the Mexican wolf reintroduced and found deep in the south west.)

Interesting facts about wolves: One has never lived until they have been the subject of a wolf’s icy stare.  They have a stare that will set the hair on one’s body on end.  Wolves can eat as much as twenty pounds of meat at a fresh kill and then can go for ten days without a bite. They mate for life. When hunting they can run over forty miles to subdue their prey which they intensely study for a weakness before they make the kill.  Males can reach 150 pounds.

Near shore waters off the coast of Alaska, Washington, Oregon, and California are the places to find these whales……(For other whales, one needs to go to other shores or places Like the saint Lawrence seaway)

Viewing tipsfor whales include looking for the Dorsal fins or the flukes (tails) of the whales or look for the spray as they surface and exhale and listen for the whooshing sound of the exhale  when they surface.  When humpbacks deep dive they lift their flukes out of the water.

Interesting facts of whales is they can stay submerged for at least 30 minutes.  Humpbacks are a baleen whale (basically a filter feeder), whereby, Orca are toothed whales (kill their prey….fish and other mammals).  Humpback females can weigh as much as 35 tons and males 25 tons, whereby, Killer whales males weigh 5 ton and females weigh 3-4 tons.

Cougars are found in most western states…. The Sonoran Desert, the mountains of California and Colorado and Montana are where most sightings have occurred.  However, allow me to say this……Cougars are primarily nocturnal and very few sightings occur.  They are expanding their range and have been spotted as far east as Western Iowa.  Panthers are spotted in most of the Southeast but most are seen in Southwest Florida.

Viewing tips for cougars include seeing them by chance in the early morning hours.  They like the hardwood hammock in the Everglades or the higher mountainous areas of the Rockies.  I have seen signs on Long Mountain, CO, and the Tetons National Park area.  Look for trees that become their scratching post and I usually can smell (litter box smell where males mark their territory.) them  first.

Interesting fact about cougars: They breed in spring.  They weigh up to 150 pounds and have a home range of up to 250 square miles.  If one is being stalked, DO NOT RUN for then one becomes prey.  This is the reason most attacks have been on joggers.

Elk or wapiti (meaning light colored deer) are now found in most states. They once were found over all of the United States and then became extinct in most states east of the Rocky Mountains due to hunting.  However, with the help of reintroduction , elk are now found in many of their original places.  The best viewing can be done in many of our national parks…..Rocky Mountain and Yellowstone are two of the best.

Viewing tips for elk include early morning hours, however they are present through out the day.  Their most active times are mornings and dusk and tend to bed down during mid day.  In late September, the rut takes place and seeing the males gather harems and maintain them for mating and hearing the bellowing is a sight to behold.

Interesting facts about elk: They are the second largest deer in the world.  A large bull can have antlers over four feet long.  Elk can weigh 700 pounds.  They bred in September and give birth in June.

The Rocky Mountain goats are found in the high peaks of the Rocky Mountains.  They enjoy open, alpine ridges and tundra meadows, with very steep slopes and rugged cliffs. Mt Evans, Colorado and Glacier National Park are the best places in the lower 48 to observe them.  In Alaska, they can be seen in many of the mountain ranges especially Denali and Kenai Peninsula.

Viewing tips for the Rocky Mountain Goat include getting high into the mountains and watch the directions they are traveling.  Get ahead of them and let them come to you….or you will scare them.  In May and June the females come down the mountain to have their young.

Interesting facts about the goats: They are white as a form of protection making them hard to detect in snow.  They can jump over twelve feet and still stop and balance on the edge of a rock.  They look big but it is all hair….a male weighs under 300 pounds.

Viewing tips for the Elephant seals include a couple of beaches north of Morrow Bay, CA on Highway 1.  There are designated pull offs for Elephant seal observation. In late November the pups are born and breeding also takes place.  The newborn stay on the beach and grow for up to six months, and then take to the water.

Interesting facts of Elephant seals are the males can weigh 2500 pounds.  In breeding season the proboscis of the males increase in size so as to deepen the gutteral mating sounds.  They are prey to the Killer whales. 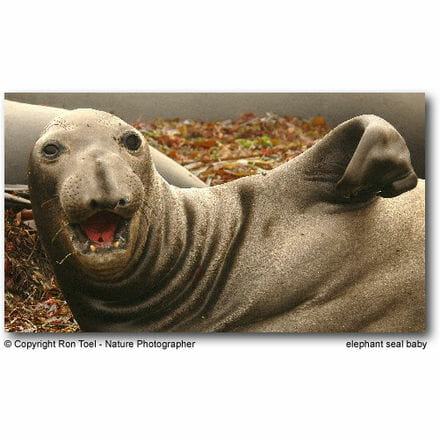 Big Horn Sheep can be found in almost every western state in the United States.  There are the desert variety in southern California, Arizona’s Sonoran desert, New Mexico and Texas.  There are the mountain variety, in Rocky Mountain National Park in Colorado, and in Custer Park in South Dakota, in Wyoming south east of Yellowstone, into Montana and Washington, through British Columbia, and into Alaska.  However, in Alaska the Dall Sheep ( a smaller version ) become more prevalent.  Dall Sheep can be found in Denali and Coopers Landing in Kenai.

Viewing tips for Big Horn Sheep include:  high open slopes with meadows, alpine ridges, and steep slopes with rugged ridges.  The same is true for the Dall sheep but the are in Alaska.

Interesting factsabout Big Horn Sheep include: They possess massive curling horn structure that contain growth rings for age determination, and females possess much smaller straight horns.  When the rut occurs, males butt head for as long a 20 hours, and usually the oldest animal, because of more massive horns, wins the right to mate with the female.  A fight is carried on for each female.  Males run in groups and females and kids run in a different group, and never associate except for mating which takes place in September or October.  They will weigh 300 pounds.  The same is true for the Dall Sheep, except they will only weigh 150 pounds.

Pronghorns can be found is every Western state in the United States.  Yellowstone is a place where one can get great close-up images.

Viewing tips for pronghorn include the grasslands, brush lands, and deserts and wide open spaces.

Interesting facts about pronghorn include that they are the fastest animal in the Western hemisphere, and can run at burst of 60 mph.  they have great eyesight and can spot predators at four miles away.

Now get out there and hunt these critters down and enjoy the journey.  Remember to keep ones own safety, both from the elements and the animals, in mind.  Do not stress the animals.  Have fun!