The Pied Imperial Pigeon (Ducula bicolor) is a pigeon which is a widespread resident breeding bird on mainly small islands adjoining the Indian Ocean from the Nicobars in an arc to New Guinea. It is also found in northern Australia in coastal areas from the Kimberlies (in Western Australia) to the Great Barrier Reef, in the east (off Queensland). Birds residing in the Kimberlies are non-migratory, while the birds east of Queensland are migratory.

Migratory birds in the east arrive from Indonesia and Papua New Guinea in August and depart February to April. They generally can be found in rainforests, eucalyptus woodland, coastal scrubs, creeks, rivers, mangroves and islands.

In north east Queensland, they migrate daily as flocks from the islands to the mainland rainforests to eat fruit. They return to islands upon dusk

It builds an untidy stick nest in a tree, usually a coconut palm and lays a single white egg, which hatches within 23 to 25 days. The squab fledges after another three weeks. In Australia they breed between August and January in mangroves, vines, palm fronds on off-shore islands, such as the Brook Islands.

The Pied Imperial Pigeon is a large plump pigeon, 37-44 centimetres (14-17.6 inches) length, with a 45 cm (18 in) wingspan. It is entirely white or pale cream, apart from black flight feathers (remiges) and tail (rectrices) feathers. The head can be brown, soiled by eating fruit. Its flight is fast and direct, with the regular beats and an occasional sharp flick of the wings which are characteristic of pigeons in general.

Males that display fly steeply up, pause, tip forward and then glide downwards. 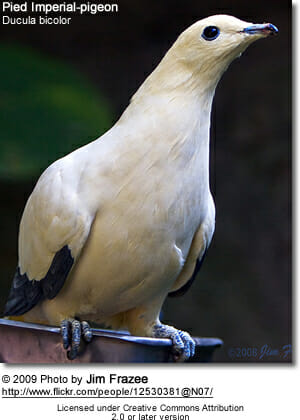 This is an arboreal dove, feeding almost exclusively on fruit. It can swallow fruits with very large seeds, the latter being regurgitated or excreted whole, depending on size, after the pulp has been removed.

The birds were once present in large colonies in Cairns, Australia but were subject to mass slaughter in the 19th Century because they were thought as pests. Populations rapidly dropped. The population is now slowly improving because of their protected status in Australia, where there are now an estimated 30,000. E. J. Banfield wrote in 1908 that in Dunk Island “fully 100,000 come and go evening and morning”, with flying colonies as wide as two miles. It was described by H. J. Frith in 1982, who stated these processions as “one of the great ornithological experiences of the tropics.”