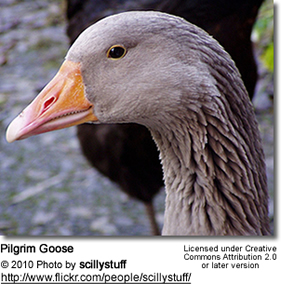 Pilgrim Geese are a threatened, medium-weight domestic geese that are appreciated for their docile and friendly temperament.

This is one of few breeds in which males and females can readily be identified by their color.

Other auto-sexing geese are: 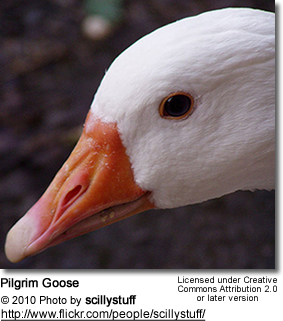 Their origin is disputed. Some believe they are descendants from European stock – specifically coming from western England and Normandy; and that these geese were brought into America by Pilgrims – hence this breed’s common name.

Others report that this species was developed from American stock during the Great Depression era (during the 30s) by Oscar Grow – who was a well-known waterfowl breeder and expert. According to him, this goose was named by his wife in honor of the “pilgrimage” their family undertook as they moved from Iowa to Missouri.

This breed was first documented in 1935 and it was admitted into the American Poultry Association’s Standard of Perfection in 1939.

Pilgrim Geese are now rare and endangered, and are, therefore, listed as critically endangered by the American Livestock Breeds Conservancy (ALBC). 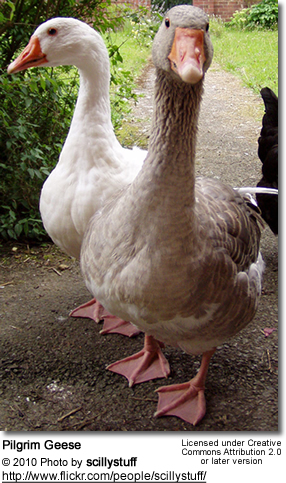 Adult Pilgrim Geese are medium-sized geese with plump bodies. They weigh between 13 and 4 pounds; however, some males may weigh up to 16 pounds.

They often have a slightly flattened crown (top of the head), a neck that is of average length and thickness, a chest that is smooth without a visible keel (breastbone), and two rounded fatty lobes on the belly. They have a knobless, orange bill, and orange feet and shanks. (Note: any sign of a “knob” is a sign of hybridization).

Adult males (ganders) have a mostly white plumage with some grey markings on the rump and the occasional traces of grey on other areas of their bodies, such as the wings and tail. Males have blue eyes.

Adult females (geese) have a mostly dove-grey plumage with occasional traces of white in their faces. The grey of their plumage is somewhat lighter than that of a Toulouse Goose and the white feathering starts at the beak occasionally forming white spectacles around the eyes. Females have dark brown eyes.

The final coloration of the plumage gets more pronounced as the geese age.

The gender of immature birds can easily be identified:

The young grow fast and may gain 10 pounds in only 10 weeks.

Ganders will mate with three to five geese at a time.

Well-managed females can produce 35 to 50 white eggs a year. Each egg weighs between 6 – 7 ounces. The fertility of their eggs can be quite low – with only a little more than 50% of them hatching.

Pilgrim Geese tend to be excellent parents that will generally care well for their young.

Contrary to their generally peaceful personality, ganders in particular may be protective of their nests when breeding, and is likely to come hissing or “honking” towards the human caretakers as they approach their nests. However, they generally eventually back off.

This breed is less aggressive than other geese and is known for their calm and friendly personality.

Pilgrim Geese are excellent foragers. They will graze in pastures, orchards or yards, feeding on dandelions, and other weeds, as well as on grass and other plant matter. They will naturally keep weeds down and at the same time fertilize the lawn and pasture through their manure.