The Pine Grosbeaks (Pinicola enucleator) are commonly referred to as Pine Bullfinches or Pine Rosefinches. They are the largest of the northern finch species. 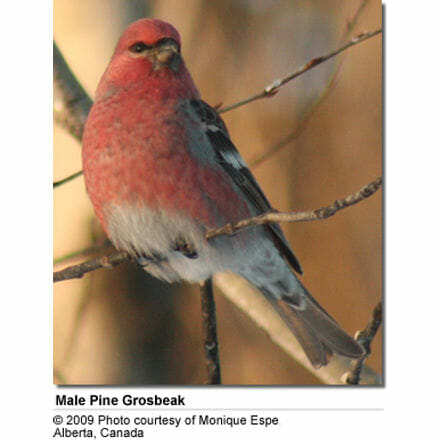 The Pine Grosbeaks are permanent residents throughout most of their range; however, those that occur in the extreme north will migrate south for the winter. When food is scarce, they may descend from mountains into woods at sea level.

They occur in the coniferous forests in Alaska through Canada and east to Newfoundland and Nova Scotia, and south in western mountains to California and Arizona in the United States. Some winter in mid-western United States and New England.

They are vagrants to the following countries:

Pine Grosbeaks are large bulky finches that measure 20- 25 cm (8 -10 in) in length (from head to tip of tail). The black bill is large, stubby and strongly curved. The black tail is long and forked. They have white wing bars.

Adult males have a mostly a dull rose-red plumage (head, back and rump); with dark streaking on the back. The dark wings have two white wing bars. Juvenile males have a grey body, except for a dull pinkish red head and rump.

Females look similar to the first-year males, with olive-yellow markings on the head and rump; and grey on the back and under plumage.

They quickly grow confiding and usually don’t mind it when people approach them. They are generally slow moving.

Their call is described as a 3-note whistle.

The bulky nest is made of grasses, rootlets and moss, lined with hair and down. The nest is situated low on a horizontal branch or in a fork of a conifer, usually no more than about 10-12′ (3-4 m) from the ground. The average number of eggs in a clutch are 2 to 5. The eggs are blue-green, blotched. The eggs are incubated for about 13 – 15 days.

These birds favor the seeds and fruit of trees, such as mountain ash and cedar. Their diet consists of seeds, buds, berries and insects. Outside of the nesting season, they often feed in flocks.

They settle in a tree and feed, snapping off buds or seeking the pits in fruit, until sated or disturbed.