The Pink-footed Goose (Anser brachyrhynchus) is a goose which breeds in eastern Greenland, Iceland and Svalbard. It is migratory, wintering in northwest Europe, especially Great Britain, the Netherlands, and western Denmark.

The name is often abbreviated in colloquial usage to Pinkfoot (plural Pinkfeet). 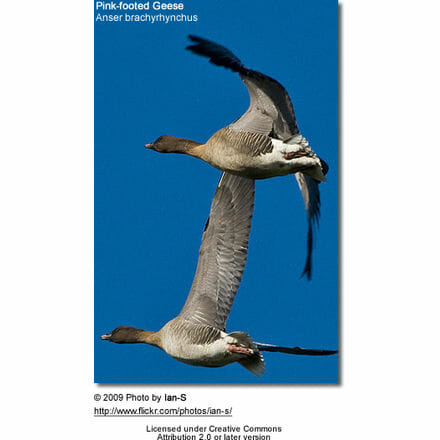 It has a short bill, bright pink in the middle with a black base and tip, and pink feet. The body is mid grey-brown, the head and neck a richer, darker brown, the rump and vent white, and the tail grey with a broad white tip.

The upper wing-coverts are of a somewhat similar pale bluish-grey as in the Greylag Goose, and the flight feathers blackish-grey.

The species is most closely related to the Bean Goose Anser fabalis (having even been treated as a subspecies of it at times in the past), sharing a similar black-and-colored pattern bill, but differing in having pink on the bill and legs where the Bean Goose is orange, and in the paler, greyer plumage tones.

It is similar in size to the small rossicus subspecies of Bean Goose, but distinctly smaller than the nominate subspecies fabalis.

It produces a medley of high-pitched honking calls, being particularly vocal in flight, with large skeins being almost deafening.

There are two largely discrete populations of Pink-footed Goose. The Greenland and Iceland population winter in Great Britain, while the Svalbard population winters in the Netherlands and Denmark, with small numbers also in Norway (where it is common on migration), northern Germany, and Belgium.

Populations have risen spectacularly over the last 50 years, due largely to increased protection from shooting on the wintering grounds. Numbers wintering in Great Britain have risen almost tenfold from 30,000 in 1950 to 292,000 in October 2004.

The numbers wintering in Denmark and the Netherlands have also risen, with about 34,000 in 1993. The most important single breeding site, at Þjórsárver in Iceland (holding 10,700 pairs in 1970), was only discovered in 1951, by Sir Peter Scott and his team who made an expedition to seek the breeding grounds.

Large to huge wintering flocks graze on farmland; individual flocks can be spectacular, such as the 66,000 at Loch of Strathbeg, Aberdeenshire in early September 2003. 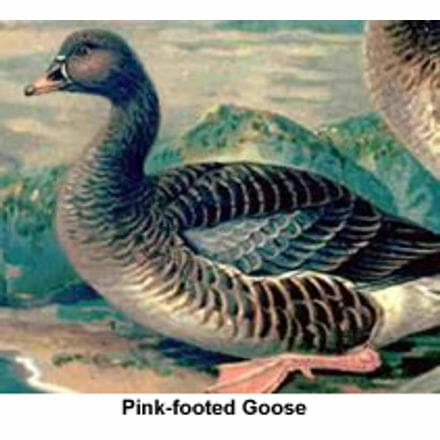 Nesting is often on cliffs close to glaciers to provide protection from mammalian predators (mainly Arctic Fox), also on islets in lakes. Three to six eggs are laid in early to mid May in Iceland, late May in Svalbard, with incubation lasting 26–27 days.

On hatching, the goslings accompany the parents on foot to the nearest lake, where they fledge after about 56 days. Southbound migration is from mid September to early October, and northbound from mid April to early May.

The diet is almost entirely vegetarian. In summer, they feed on a wide range of tundra plants, both on land and in water. In winter, they graze primarily on oilseed rape, sugar beet, potato, and various grasses; damage to crops can be extensive, though their grazing can also benefit particularly sugar beet and potato farmers by gleaning leaves and roots left behind after the crop is harvested, reducing the transmission of crop diseases from one year to the next.

Despite the proximity to the large winter numbers in Great Britain, only very small numbers occur in Ireland and France. It is a rare vagrant to several other European countries and as far south as Morocco and the Canary Islands, and also to eastern Canada and the United States (from Newfoundland south to Pennsylvania).

The Pink-footed Goose is one of the species to which the Agreement on the Conservation of African-Eurasian Migratory Waterbirds (AEWA) applies.