The Pintail or Northern Pintail (Anas acuta) is a widely occurring duck which breeds in the northern areas of Europe, Asia and North America.

It is strongly migratory and winters south of its breeding range to the equator. Unusually for a bird with such a large range, it has no geographical subspecies if the possibly conspecific Eaton’s Pintail is considered to be a separate species.

This is a fairly large duck, with a long pointed tail that gives rise to the species’ English and scientific names. The male has a very distinctive brown, grey and white appearance, whereas the female has mainly light brown plumage and a shorter tail. The male’s call is a mellow whistle, whereas the female quacks like a Mallard.

The Northern Pintail is a bird of open wetlands which nests on the ground, often some distance from water. It feeds by dabbling for plant food and adds small invertebrates to its diet during the nesting season. It is highly gregarious when not breeding, forming large mixed flocks with other species of duck.

This duck’s population is affected by predators, parasites and avian diseases. Human activities, such as agriculture, hunting and fishing, have also had a significant impact on numbers. Nevertheless, this species’ huge range and large population mean that it is not threatened globally. 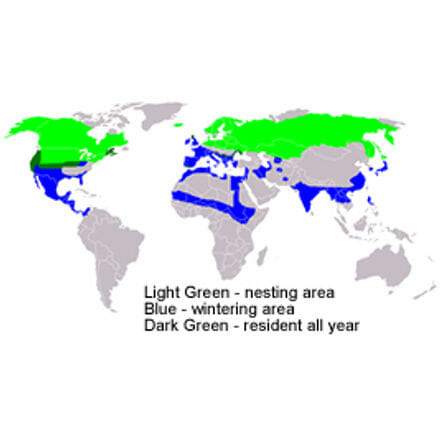 This dabbling duck breeds across northern areas of Eurasia south to about Poland and Mongolia, and in Canada, Alaska and the Midwestern United States. It winters mainly south of its breeding range, reaching almost to the equator in Panama, northern sub-Saharan Africa and tropical South Asia. Small numbers migrate to Pacific islands, particularly Hawaii, where a few hundred birds winter on the main islands in shallow wetlands and flooded agricultural habitats.

Transoceanic journeys also occur: a bird that was caught and ringed in Labrador, Canada, was shot by a hunter in England nine days later, and Japanese-ringed birds have been recovered from six US states east to Utah and Mississippi.

In parts of the range, such as Great Britain and the northwestern United States, the Pintail may be present all year.

The Northern Pintail’s breeding habitat is open unwooded wetlands, such as wet grassland, lakesides or tundra. In winter, it will utilise a wider range of open habitats, such as sheltered estuaries, brackish marshes and coastal lagoons.

It is highly gregarious outside the breeding season and forms very large mixed flocks with other ducks.

The male in breeding plumage has a chocolate-brown head and white breast with a white stripe extending up the side of the neck. Its upperparts and sides are grey, but elongated grey feathers with black central stripes are draped across the back from the shoulder area.

The vent area is yellow, contrasting with the black underside of the tail, which has the central feathers elongated to as much as 10 centimetres (4 in). The bill is bluish and the legs are blue-grey.

The adult female is mainly scalloped and mottled in light brown with a more uniformly grey-brown head, and its pointed tail is shorter than the male’s; it is still easily identified by its shape, long neck, and long grey bill.

In non-breeding (eclipse) plumage, the drake Pintail looks similar to the female, but retains the male upperwing pattern and long grey shoulder feathers. 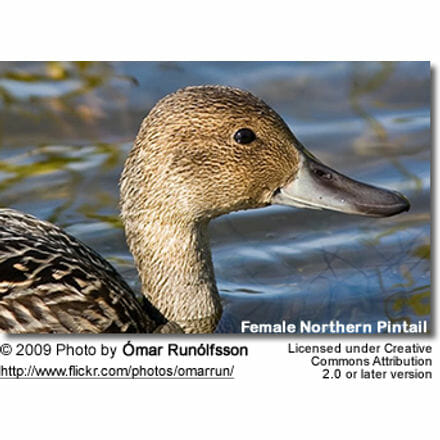 Juvenile birds resemble the female, but are less neatly scalloped and have a duller brown speculum (= distinctive wing patch) with a narrower trailing edge.

The Pintail walks well on land, and swims buoyantly.

It has a very fast flight, with its wings slightly swept-back, rather than straight out from the body like other ducks.

In flight, the male shows a black speculum bordered white at the rear and pale rufous at the front, whereas the female’s speculum is dark brown bordered with white, narrowly at the front edge but very prominently at the rear, being visible at a distance of 1600 metres (1 mi).

Both sexes reach sexual maturity at one year of age. The male courts the female by swimming close to her with his head lowered and tail raised, continually whistling.

If there is a group of males, they will chase the female in flight until only one drake is left. The female prepares for copulation, which takes place in the water, by lowering her body; the male then bobs his head up and down and mounts the female, taking the feathers on the back of her head in his mouth. After mating, he raises his head and back and whistles.

Breeding takes place between April and June, with the nest being constructed on the ground and hidden amongst vegetation in a dry location, often some distance from water. It is a shallow scrape on the ground lined with plant material and down.

The female lays seven to nine cream-colored eggs at the rate of one per day; the eggs are 55 x 38 millimetres (2.2 x 1.5 in) in size and weigh 45 grammes (1.6 oz), of which 7% is shell. If predators destroy the first clutch, the female can produce a replacement clutch as late as the end of July.

The hen alone incubates the eggs for 22 to 24 days before they hatch. The precocial downy chicks are then led by the female to the nearest body of water, where they feed on dead insects on the water surface. The chicks fledge in 46 to 47 days after hatching, but stay with the female until she has completed moulting.

Around three-quarters of chicks live long enough to fledge, but not more than half of those survive long enough to reproduce. The maximum recorded age is 27 years and 5 months for a Dutch bird, but the average life span for wild birds will be much shorter than this, and is likely to be similar to that of other wild ducks, such as the Mallard, at about two years.

The Pintail feeds by dabbling and upending (feeding upside down in shallow water) for plant food mainly in the evening or at night, and therefore spends much of the day resting. Its long neck enables it to take food items from the bottom of water bodies up to 30 centimetres (1 ft) deep, which are beyond the reach of other dabbling ducks like the Mallard.

The winter diet is mainly plant material including seeds and rhizomes of aquatic plants, but the Pintail sometimes feeds on roots, grain and other seeds in fields, though less frequently than other Anas ducks. During the nesting season, this bird eats mainly invertebrate animals, including aquatic insects, mollusks and crustaceans.

The male’s call is a soft proop-proop whistle, similar to that of the Common Teal, whereas the female has a Mallard-like descending quack, and a low croak when flushed.

Pintail nests and chicks are vulnerable to predation by mammals, such as foxes and badgers, and birds like gulls, crows and magpies. The adults can take flight to escape terrestrial predators, but nesting females in particular may be surprised by large carnivores such as bobcats.[9]

Large birds of prey, such as Northern Goshawks, will take ducks from the ground, and some falcons, including the Gyrfalcon, have the speed and power to catch flying birds.

It is susceptible to a range of parasites including Cryptosporidium, Giardia, tapeworms, blood parasites and external feather lice and is also affected by other avian diseases. It is often the dominant species in major mortality events from avian botulism and avian cholera, and can also contract avian influenza, the H5N1 strain of which is highly pathogenic and occasionally infects humans.

The Northern Pintail is a popular species for game shooting because of its speed, agility, and excellent eating qualities, and is hunted across its range. Although one of the world’s most numerous ducks, the combination of hunting with other factors has led to population declines, and local restrictions on hunting have been introduced at times to help conserve numbers.

This species’ preferred habitat of shallow water is naturally susceptible to problems such as drought or the encroachment of vegetation, but this duck’s habitat might be increasingly threatened by climate change.

Populations are also affected by the conversion of wetlands and grassland to arable crops, depriving the duck of feeding and nesting areas. Spring planting means that many nests of this early breeding duck are destroyed by farming activities, and a Canadian study showed that more than half of the surveyed nests were destroyed by agricultural work such as ploughing and harrowing.

Hunting with lead shot, along with the use of lead sinkers in angling, has been identified as a major cause of lead poisoning in waterfowl, which often feed off the bottom of lakes and wetlands where the shot collects.

A Spanish study showed that Northern Pintail and Common Pochard were the species with the highest levels of lead shot ingestion, higher than in northern countries of the western Palearctic flyway, where lead shot has been banned.

In the United States, Canada, and many western European countries, all shot used for waterfowl must now be non-toxic, and therefore may not contain any lead.

The Northern Pintail has a large range, estimated at 10 million square kilometres (0.4-3.8 million sq mi), and a population estimated at 6.1–7.7 million individuals. It is therefore not believed to meet the IUCN Red List threshold criterion of a population decline of more than 30% in ten years or three generations, and is evaluated as Least Concern.

In the Palaearctic, breeding populations are declining in much of the range, including its stronghold in Russia, and are otherwise stable or fluctuating.

Pintails in North America at least have been badly affected by avian diseases, with the breeding population falling from more than 10 million in 1957 to 3.5 million by 1964.

Although the species has recovered from that low point, the breeding population in 1999 was 30% below the long-term average, despite years of major efforts focused on restoring the species. In 1997, an estimated 1.5 million water birds, the majority being Northern Pintails, died from avian botulism during two outbreaks in Canada and Utah.

The Northern Pintail is one of the species to which the Agreement on the Conservation of African-Eurasian Migratory Waterbirds (AEWA) applies, but it has no special status under the Convention on International Trade in Endangered Species of Wild Fauna and Flora (CITES), which regulates international trade in specimens of wild animals and plants.

This species was first described by Linnaeus in his Systema naturae in 1758 as Anas acuta The scientific name comes from two Latin words: anas, meaning “duck”, and acuta, which comes from the verb acuere, which means “sharpen”; the species term, like the English name, refers to the pointed tail of the male.

Within the large dabbling duck genus Anas, the Northern Pintail’s closest relatives are other pintails, such as the Yellow-billed Pintail (A. georgica) and Eaton’s Pintail (A. eatoni). The pintails are sometimes separated in the genus Dafila (described by Stephens, 1824), an arrangement supported by morphological, molecular and behavioural data. The famous British ornithologist Sir Peter Scott gave this name to his daughter, the artist Dafila Scott.

Eaton’s Pintail has two subspecies, A. e. eatoni (the Kerguelen Pintail) of Kerguelen Islands, and A. e. drygalskyi (the Crozet Pintail) of Crozet Islands, and was formerly considered conspecific with the northern hemisphere’s Northern Pintail. Sexual dimorphism is much less marked in the southern pintails, with the male’s breeding appearance being similar to the female plumage. Unusually for a species with such a large range, Northern Pintail has no geographical subspecies if Eaton’s Pintail is treated as a separate species.

Northern Pintails feed by dabbling for plant food mainly in the evening or at night. During the nesting season, this bird also eats aquatic insects, mollusks and crustaceans. It sometimes feeds on grasses and seeds in fields.