The Pionus Parrots are endemic to Central and South America. Pionus is a medium-sized parrot with a chunky body, bare eye-ring, (which can vary in color) and a short tail.

The Pionus Parrots are endemic to Central and South America.

The most commonly available pionuses in the pet trade are (Species Name and Origin): 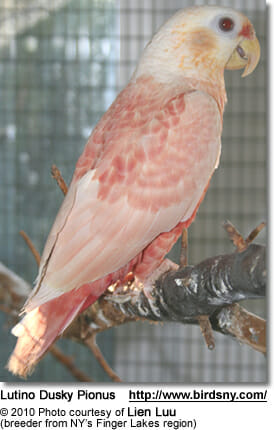 Pionus is a medium-sized parrot with a chunky body, bare eye ring, (which can vary in color) and a short tail.

They are similar to Amazon parrots, but smaller.

Coloration is generally subdued yet complex; under bright lighting, their feathers shimmer with iridescent brilliance. All species share a bright red patch of feathers under the tail; the scientific name of one species, the Blue-headed Pionus, (P. menstruus), refers to this.

Males and females look alike, and surgical or DNA (blood) sexing is recommendef for all Pionus species if gender needs to be confirmed for breeding purposes.