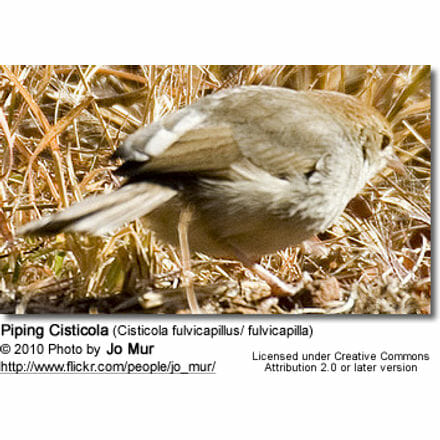 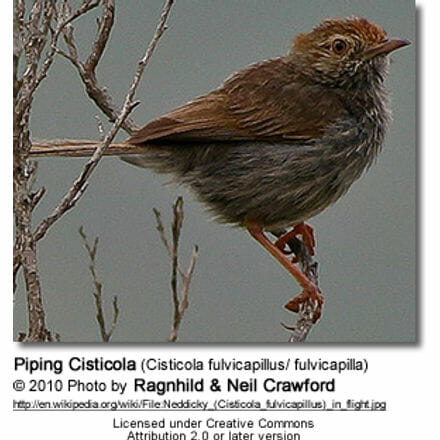 This Cisticola is a resident breeder in much of Africa from Gabon, the Democratic Republic of Congo, Rwanda and Tanzania south to the Cape.

The Piping Cisticola is a very common bird of open woodland, including savannah with trees and open plantations of exotic species. It avoids densely wooded habitats.

The Piping Cisticola is a small, vocal, dull-colored brown bird, 11 cm in length. Its tail is not as short as that of some other cisticola species. This bird has a reddish cap and a plain back. The underparts are buff, darker in tone on the breast. The brown bill is short and straight, and the feet and legs are pinkish-brown. The eye is light brown.

Males and females look alike, but juvenile birds are yellower.

The southern form found in the western Cape Province has grey underparts and a grey-brown back. Although cisticolas can be very similar in plumage, this greyish subspecies is therefore quite distinctive. 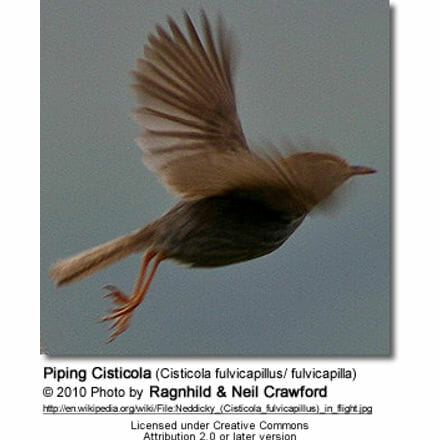 The call of the Piping Cisticola is a monotonous, penetrating, repetitive weep weep weep. The alarm call is a loud clicking tictictictic, like a fingernail running across the teeth of a comb.

The Piping Cisticola builds a ball-shaped nest with a side entrance from dry grass, cobwebs and felted plant down. The nest is placed low in a thorny shrub, or in thick grass. In South Africa, this bird breeds mainly from September to March.

The Piping Cisticola It is usually seen in pairs or singly, flitting in a bush or the grass at the base of a tree as it forages for small insects.

This common species has a large range, with an estimated extent of 4,100,000 km². The population size is believed to be large, and the species is not believed to approach the thresholds for the population decline criterion of the IUCN Red List (i.e. declining more than 30% in ten years or three generations). For these reasons, the species is evaluated as Least Concern.