The Pomeranian Goose originates from North East Germany. It is the only descendent of the European Greylag specifically bred for a single-lobed paunch (Ashton, 1999).

In Europe it is found in Grey and White but the most popular and common form is the Saddleback, which is the variety mainly found in the United States, in both Buff and Grey.

This is a good-size, heavy-set, medium-sized goose breed. Ganders weigh between 17 to 18 lbs; while hens tend to weigh in at an average of 15 lbs.

The Pomeranian comes in a variety of colors and patterns. Historically the Greys were the most popular, but in the later 20th century the Saddleback (both Buff and Gray) became the more popular type.

Saddleback Pomeranians exist only in North America. The head, back, and flanks of a saddleback are either buff or gray.

A Pomeranian should have a pinkish red beak, as well as reddish orange legs and feet, and blue eyes (Holderread, 1981). 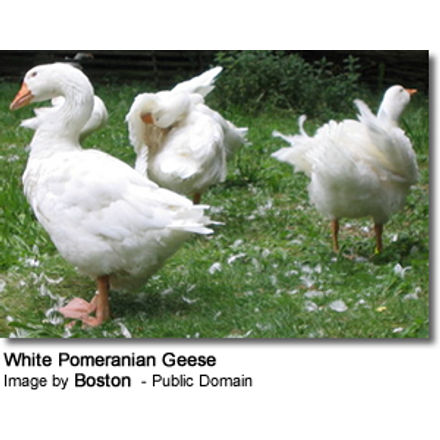 These are hardy geese and are quite prolific. They can produce between 60 to 80 eggs a season, although it is best to keep laying to 15 to 35 eggs annually to allow the parents the rest and to give them the physical recovery they need. The eggs are incubated for 28 to 34 days. Ganders can be mated with three to four hens.

When selecting breeders, look for birds with chunky bodies and well-defined markings. When viewed from behind and above, the colored areas of the backs and shoulders should be reminiscent of the classic heart shape. Solid-colored heads are preferred, but many have white feathers around the base of their bills. Some strains of Pomeranians produce birds with slight indications of knobs at the base of their bills. Guard against this fault since it is evidence of crossbreeding. Also, avoid breeding from specimens with dewlaps, orange bills and feet, excessively white heads, dark feathers in the wings, and undersized bodies (Holderread, 1981).

These geese are quite social and “chatty.” While some Pomeranians are docile, others may respond aggressively. Pomeranians tend to greet visitors noisily, so they make good watch (sentinel) birds.