The Prairie Warbler, Dendroica discolor, is a small songbird of the New World warbler family. 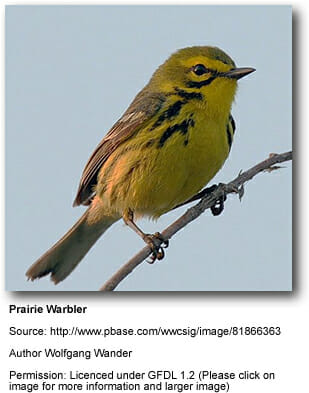 Their breeding habitats are brushy areas and forest edges in eastern North America. The Prairie Warbler’s nests are open cups, which are usually placed in a low area of a tree or shrub.

These birds are permanent residents in the southern parts of their range. Other birds migrate to northeastern Mexico and islands in the Caribbean.

Prairie Warblers forage actively on tree branches, and sometimes fly around with the purpose of catching insects, which are the main food source of these birds.

Prairie Warblers have two categories of songs, referred to as Type A and Type B. Type A songs are typically a series of ascending buzzy notes. The B songs are an ascending series of whistled notes that often contain some buzzy notes.

Compared to A songs, the B songs are lower in pitch, have fewer, longer notes. The total song length is longer as well in Type B songs. The use of these two song categories is associated with certain contexts.

A songs are sung throughout the day when males first arrive on their breeding grounds. Once males are paired they begin to sing B songs during the dawn chorus and then will intersperse A songs in their singing during the rest of the day.

Part of their call note repertoire is a tsip call. During dawn, chorus B songs are interspersed with rapid loud “check” calls.

These birds wag their tail feathers frequently. The numbers of these birds are declining due to habitat loss; this species also suffers from nest parasitism by the Brown-headed Cowbird.