The Rock Ptarmigan, Lagopus muta, is also known as Snow Chicken or Partridge in North America, where it is the official bird for the territory of Nunavut, Canada, and the official game bird for the province of Newfoundland and Labrador, Canada.

A sedentary species, the Rock Ptarmigan breeds across arctic and subarctic Eurasia and North America (including Greenland) on rocky mountainsides and tundra.

It is widespread in the Arctic Cordillera and is found in isolated populations in the mountains of Scotland, the Pyrenees, the Alps, Bulgaria, the Urals, the Pamir Mountains, the Altay Mountains and Japan.

During the last ice age, the species was far more widespread in continental Europe. 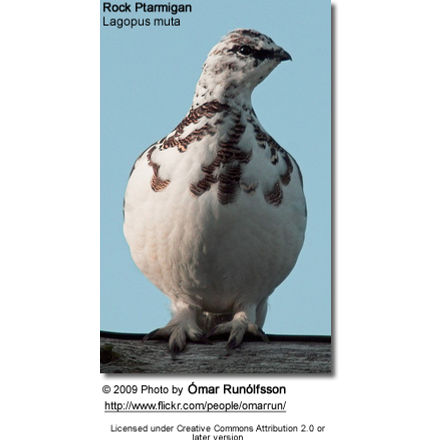 The Rock Ptarmigan is seasonally camouflaged; its feathers moult from white in winter to brown in spring or summer.

The breeding male has greyish upper parts with white wings and underparts. In winter, its plumage becomes completely white except for the black tail.

It can be distinguished from the winter Willow Grouse (Willow Ptarmigan in North America) by habitat — the Rock Ptarmigan prefers higher elevations and more barren habitat; it is also smaller with a more delicate bill.

Because of the remote habitat in which it lives, it has only a few predators — such as Golden Eagles — and can be surprisingly tame and approachable.

The male’s “song” is a loud croaking.

The Rock Ptarmigan feeds primarily on birch and willow buds and catkins when available. It will also take various seeds, leaves, flowers and berries of other plant species. Insects are taken by the developing young. 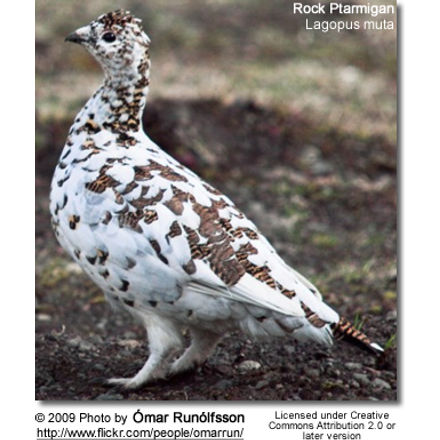 Apart from the comb, the male Rock Ptarmigan has no ornaments or displays that are typical for grouses in temperate regions. Studies on other grouses have shown that much variation in comb size and colour exists between the species, and that the comb is used in courtship display and aggressive interactions between males. Many studies such as have shown that there is a strong correlation between the comb size and the level of testosterone in males; one report from 1981 showed that the amount of testosterone is correlated to aggressiveness against other males.

The male’s comb has been the focus of studies regarding sexual selection. Studies of a population of male Rock Ptarmigans in Scarpa Lake, Nunavut, have shown that during the first year, mating success among males was influenced by comb size and condition, and bigamous males had larger combs than monogamous males. The correlation to size disappeared after the first year, but the correlation to comb condition remained. This is consistent with another study of the same population of L. muta that showed that mating success overall is correlated to comb condition. Exceptions were first-time breeders, in which the size of the comb influenced mating success. 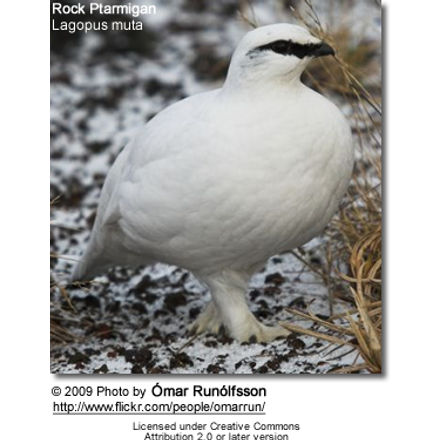 Rock Ptarmigan meat is a popular part of festive meals in Icelandic cuisine. Hunting of Rock Ptarmigans was banned in Iceland in 2003 and 2004 due to its declining population. Hunting has been allowed again since 2005, but is restricted to October and only for personal consumption, i.e. selling Rock Ptarmigan is illegal.

Lagopus, is derived from Ancient Greek lagos (λαγως), meaning “hare”, + pous (πους), “foot”, in reference to the bird’s feathered legs. The species name, muta, comes from New Latin and means “mute”, referring to the simple croaking song of the male. It was for a long time misspelt mutus, in the erroneous belief that the ending of Lagopus denotes masculine gender. However, as the Ancient Greek term λαγωπους is of feminine gender, and the species name has to agree with that, the feminine muta is correct.

The word ptarmigan comes from the Scottish Gaelic tàrmachan, which may be related to the word torm, which means a “murmur”. The silent initial p was added in the 17th century through the influence of Greek, especially pteron (πτερον), “wing”, “feather” or “pinion”.