Puffinus is a genus of seabirds in the order Procellariiformes. It comprises about 20 small to medium-sized shearwaters. There are two other shearwater genera Calonectris, which comprises three large shearwaters, and Procellaria with another four large species. The latter are usually named as petrels, although they are thought to be more closely related to the shearwaters than to the other petrels.

Despite the resemblance in the name, the puffins are auks, and completely unrelated to the shearwaters in the genus Puffinus; the genus name Puffinus is actually a New Latin loanword based on the English “puffin”. The original Latin term for shearwaters was usually the catchall name for sea-birds, mergus (Thompson 1918).

The taxonomy of this group is the cause of much debate, and the number of recognised species depends on the source.

The species in this group are long-winged birds, dark brown or black above, and white to dark brown below. They are pelagic outside the breeding season. They are most common in temperate and cold waters. 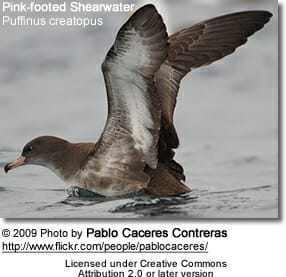 These tubenose birds fly with stiff wings, and use a shearing flight technique to move across wave fronts with the minimum of active flight. Some small species, like Manx Shearwater are cruciform in flight, with their long wing held directly out from their bodies.

Many are long-distance migrants, perhaps most spectacularly the Sooty and Short-tailed Shearwaters which perform migrations of 14,000 km or more each year.

Puffinus shearwaters come to islands and coastal cliffs only to breed. They are nocturnal at the colonial breeding sites, preferring moonless nights. This is to minimise predation. They nest in burrows and often give eerie contact calls on their nighttime visits. They lay a single white egg.

They feed on fish, squid and similar oceanic food. Some will follow fishing boats to take scraps, notably Sooty Shearwater; these species also commonly follow whales to feed on fish disturbed by them. 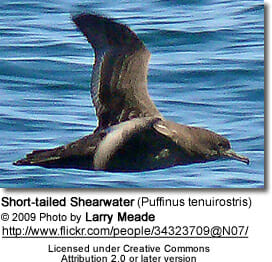 Traditionally, Puffinus has been grouped with the Procellaria and Calonectris shearwaters. However, more recent results (Austin 1996, Heidrich et al. 1998, Austin et al. 2004) have determined that the genus is apparently paraphyletic and while in part very close to Calonectris, forms a clade with the genera Pseudobulweria and Lugensa which were formerly presumed to be gadfly petrels, and can be divided in what has been called the “Puffinus” and the “Neonectris” group after notable species; the latter would if separated as a distinct genus be named Ardenna (Penhallurick & Wink 2004).

The former is taxonomically confusing, with species having been split and re-merged in the last years (Heidrich et al. 1998, Austin et al. 2004).

Several fossil species which became extinct long ago are also known. It appears that the proportion of larger (“Neonectris”) species was larger before the Pliocene, i.e. before marine mammals diversified: