From its name in French, talève sultane, it is also known as the Sultana Bird. It should not be confused with the American Purple Gallinule, Porphyrio martinica. The common name in New Zealand, used for the subspecies P. p. melanotus, is Pūkeko, which is the Māori name.

The variant found in Samoa is called “manuali’i,” meaning “chiefly bird” in the Samoan language.

There are 13 or more subspecies of the Purple Swamphen (depending on the authority) which differ mainly in the plumage colours. 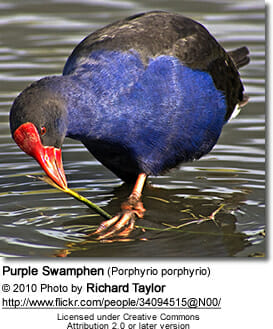 The subspecies groups are:

European birds are overall purple-blue, African and south Asian birds have a green back, and Australasian and Indonesian birds have black backs and heads. The Philippines subspecies is pale blue with a brown back.

This chicken-sized bird, with its huge feet, bright plumage and red bill and frontal shield is unmistakable in its native range. The species is highly dispersive. Purple Swamphens are considered to be the ancestors of several island species including the extinct Lord Howe Swamphen and two species of Takahē in New Zealand. On islands where closely related species have become extinct or declined due to human interference, such as New Zealand or New Caledonia, this species has established itself relatively recently.

The species has a very loud explosive call described as a “raucous high-pitched screech, with a subdued musical tuk-tuk“. It is particularly noisy during the breeding season.

Despite being clumsy in flight it can fly long distances, and it is a good swimmer, especially for a bird without webbed feet. The Purple Swamphens are generally seasonal breeders, but the season varies across their large range, correlating with peak rainfall in many places, or summer in more temperate climes. The Purple Swamphen breeds in warm reed beds. The male has an elaborate courtship display, holding water weeds in his bill and bowing to the female with loud chuckles. In the western parts of the range the pattern of social behaviour tends to be monogamy, but cooperative breeding groups are more common in the eastern parts of the range. These groups may consist of multiple females and males sharing a nest or a male female pair with helpers drawn from previous clutches.

Pairs nest in a large pad of interwoven reed flags, etc., on a mass of floating debris or amongst matted reeds slightly above water level in swamps, clumps of rushes in paddocks or long unkempt grass. Multiple females may lay in the one nest and share the incubation duties. Each bird can lay 3–6 speckled eggs, pale yellowish stone to reddish buff, blotched and spotted with reddish brown. A communal nest may contain up to 12 eggs. The incubation period is 23–27 days, and is performed by both sexes as well as any helpers that might be present. The precocious chicks are feathered with downy black feathers and able to leave the nest soon after hatching, but will often remain in the nest for a few days. Young chicks are fed by their parents (and group members) for between 10–14 days, after which they begin to feed themselves. 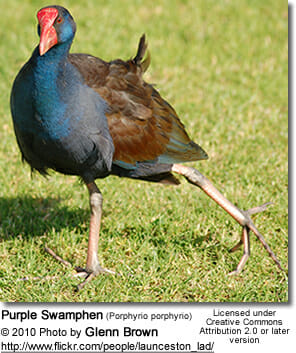 The Purple Swamphen prefers wet areas with high rainfall, swamps, lake edges and damp pastures. The birds often live in pairs and larger communities. It clambers through the reeds, eating the tender shoots and vegetable-like matter.

They have been known to eat eggs, ducklings, small fish and invertebrates such as snails. They will often use one foot to bring food to their mouth rather than eat it on the ground.

Where they are not persecuted they can become tame and be readily seen in towns and cities.

Evidence from Pliny the Elder and other sources shows that the Romans kept Purple Swamphens as decorative birds at large villas and expensive houses. They were regarded as noble birds and were among the few birds that Romans did not eat.

The Purple Swamphen is occasionally recorded as an escape from captivity in Britain and elsewhere. An introduced population exists in Florida, though state wildlife biologists are trying to eradicate the birds. The species is considered to be Least Concern globally by the IUCN.

While the species as a whole is not threatened, some subspecies have declined. In New Zealand and Australia it has expanded due to the creation of new artificial lakes and ponds, but the nominate race in the Mediterranean has declined due to habitat loss, hunting and pesticide use, and requires strict protection.

In Portugal the species declined greatly in the 19th and 20th centuries, but has increased more recently thanks to protection and some reintroduction schemes, although it remains rare and has a fragmented distribution. In Africa it varies from being common to being uncommon.

The subspecies endemic to Palau has been considered endangered as well, although a 2005 survey found that the subspecies, while potentially threatened, is at least now still common.