The Purple Martins (Progne subis) are typically found across eastern North America, and also in some locations on the west coast from British Columbia to Mexico. The Purple Martin migrates to the Amazon basin in winter. 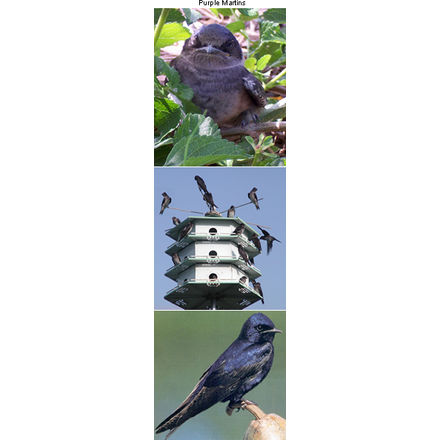 The Purple Martins (Progne subis) are typically found across eastern North America, and also in some locations on the west coast from British Columbia to Mexico. The Purple Martin migrates to the Amazon basin in winter.

The first record of this species in Europe was a single bird on Lewis, Scotland on 5-6 September 2004, and the second was on the Azores on 6 September 2004.

These sociable birds live and breed in colonies of martins.

The Purple Martin averages 20 cm in length (including tail).

Adults have a forked tail. Adult males are a glossy dark purple, and adult females are dark on top with some purple on the back, and lighter underparts.

Juveniles are greyish-brown above and whitish below, gaining some purple feathers by their first winter.

The eastern nominate form is totally dependent on humans for nest sites, as they nest exclusively in man-made bird houses.

The paler subspecies P. s. hesperia of Arizona and western Mexico uses only woodpecker holes in Saguaro and other large cacti, and the large pale west coast form P. s. arboricola utilizes woodpecker and other natural cavities as well as nesting boxes and gourds.

These birds hunt for insects in flight, although sometimes they will pick up insects off the ground. They usually fly relatively high, so, contrary to popular opinion, mosquitoes do not form a large part of their diet.

These swallows eat thousands of flying insects a day, which is a good reason for people wanting to attract them to their gardens.

Purple Martins are the only birds totally dependent on humans for housing / nest sites, as they nest exclusively in man-made bird houses, of which about a million are provided.

Martins are sometimes difficult to attract; they tend to stay away from well-shaded lawns with big trees.

The houses should be erected during winter to attract birds for the nesting season. In addition to traditional martin houses, gourds are a great way to attract martins.

The male scouts arrive first, then the females and younger birds follow one to two weeks later. When they arrive, they do not nest right away, as some believe. They will feed for several days, build up their strength from the long flight, and then search for the proper nesting site.

It may take a year or two to attract martins to a new house; don’t get discouraged. If after two years you are still unsuccessful, try moving the house to a different location-sometimes 25 feet can make a difference.

Don’t expect a nest in every room. Four nesting pairs in a 12-room house is good occupancy. Extra rooms are used for roosting and for young, preflight birds. Also, sparrows will likely fill a few vacancies. Before the martins are nesting, leave the sparrow nests alone to avoid disturbing the martins.

Late nesting (May) is very common for the martin, for two reasons. First, the young birds (last season’s fledglings) need to settle down, mature and learn by observing the older birds. Second, birds disrupted during their first attempt to nest, due to improper housing or predators, will choose another site to nest.

The call is described as a gurgly tchew-tchew.