As requested by Count Luigi Maria D’Albertis, the epithet raggiana commemorates the Marquis Francis Raggi of Genoa. The Raggiana Bird of Paradise is the national bird of Papua New Guinea, and appears on the national flag. This species, as Gerrus paradisaea, was made the national emblem in 1971.

It is distributed widely in southern and north eastern New Guinea, where its name is kumul. It is also known as cenderawasih.

It is 34cm-long, maroon-brown with greyish-blue bill, yellow iris and greyish-brown feet.

The male has a yellow crown, dark emerald-green throat and yellow collar between the throat and its blackish upper breast feathers. It is adorned with a pair of long black tail wires and large flank plumes.

The female is a comparatively drab maroonish-brown-colored bird.

The ornamental flank plumes vary from red to orange in color, depending on subspecies. 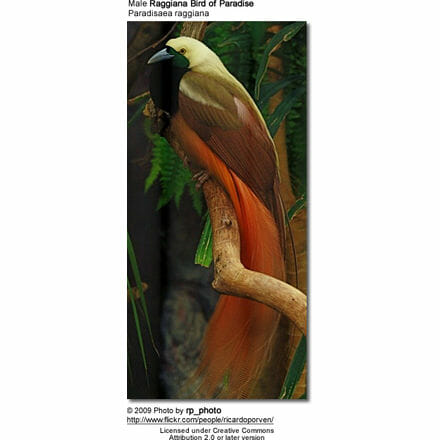 The breeding system of the Raggiana Bird of Paradise is polygamy. Males congregate in leks (a display arena for visiting females). Leks can be 30-100 meters in diameter. Within the lek there is a group of tall slender trees, competition for prominent perches and these are defended by the males from rivals. On these perches males do a display which involves clapping wings and shaking head. The female usually lays up to two pinkish buff eggs.

Its diet consists mainly of fruits and arthropods.They will also eat berries, leaves, and small animals, such as lizards and frogs.

The species is an important seed disperser of some fruiting trees in New Guinea, and is for some species of mahogany and nutmeg the main fruit disperser.

Widespread and common throughout the tropical forests of eastern New Guinea, the Raggiana Bird of Paradise is evaluated as Least Concern on the IUCN Red List of Threatened Species. It is listed on Appendix II of CITES, even though the plumes of this species are heavily cropped by natives for ceremonial headdresses, it is not a threat for their long term survival.

The Raggiana Bird of Paradise (Paradisaea raggiana) is considered by many to be the most beautiful bird species on the planet.

They have been hunted for centuries for their beautiful plumage; their feathers have been used for decoration and are sought after for their supposed mystical properties. Local tribes believed that they were the “birds of the gods” and never touched earth, feeding only on dew.

This story accentuated the value of the birds for over 100 years, and the feathers were in such high demand that it almost killed off the species.

The males are known to gather in a specific tree together in the morning to engage in mutual display, where they fluff out their extensive colorful feathers to attract a female.