The Red-backed Kingfisher (Todiramphas pyrrhopygius) was named for its flame or red-colored rump (Ancient Greek words pyrrho-/?????- “flame-colored” or “red” and pyge/???? “rump”).

This kingfisher has a predominantly blue-green and white plumage, with a distinctive chestnut rump (lower back).

Red-backed Kingfishers are mostly found in the drier regions of Australia.

Unlike other Kingfishers, they have been able to adapt to the harsher climate of Australia‘s interior deserts. They tend to avoid those areas with a high amount of rain, such as the coastal areas of the Southwest, Southeast, East and Northeast.

During the summer (breeding season), they are found in the southeastern part of the country, where they are seek out river courses to make use of the earthy banks to dig nesting burrows. They are year-round resident elsewhere in their range.

They inhabit eucalyptus woodlands, scrub and tussock grasslands (small areas of stiff, tufted grass that grow higher than the surrounding grasses). They are also found in areas with clusters of trees; their favorite being mulga trees (an Australian acacia tree) and mallee trees (a shrubby eucalyptus tree). They tend to avoid denser forests. They also occur in savannahs (flat grassland with scattered trees). 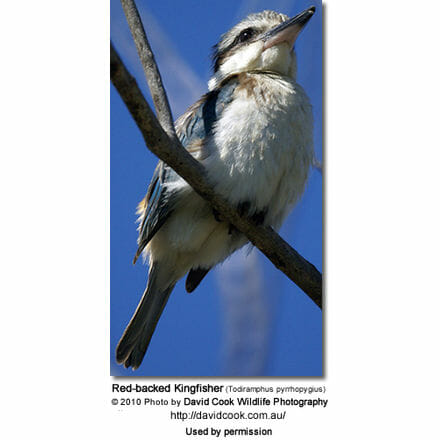 Its most distinguishing physical characteristics are its rufous-red patch on its lower back and rump and the black, striped markings running through its lore, then along its eyes to the back of its head. The crown is streaked green and white crown; the wings and tail are bluish-green wings. Its underparts are white, its back a golden orange and its wings and tail green.

The eyes are dark brown. The legs and feet are dark grey.

The female’s plumage is duller overall.

Like other Forest Kingfishers, it is a ground feeder, mostly hunting insects and small reptiles. Kingfishers kill their prey by beating them on the ground or perch to shatter the bones. Many Kingfishers can eat prey that seems too large to fit in their mouths.

The Red-backed Kingfisher will also chip away at the nest of Fairy Martins to feed their nestlings with.

Breeding season is October to December in Australia with one brood being raised, although birds may not breed in times of drought.

Breeding-age Red-backed Kingfishers migrate to river courses, where they dig their nesting burrows into earthy banks.

The nest is a burrow 0.5–1.25 m (18–50 in) into the top third section of a steep sloping bank overlooking a dry riverbed or one not overlooking water. They may vacate the site if the riverbed becomes inundated. Occasionally nests may be situated in termite mounds in the north of the country.

Its call is a descending whistle, with a harsh alarm call given by birds near the nest.