The Red-breasted Merganser (Mergus serrator) is a diving duck

It has been claimed to be the fastest bird in level flight, reaching speeds of 129 km/h (80 mph), but is disputed whether the White-throated Needletail (Swift) is faster, reportedly flying at 170 km/h (105mph).

Its breeding habitat is freshwater lakes and rivers across northern North America, Greenland, Europe and Asia.

It nests in sheltered locations on the ground near water.

It is migratory and many northern breeders winter in coastal waters further south.

The Red-breasted Merganser is one of the species to which the Agreement on the Conservation of African-Eurasian Migratory Waterbirds (AEWA) applies.

The adult Red-breasted Merganser is 52-58 cm long with a 67-82 cm wingspan. It has a spiky crest and long thin red bill with serrated edges. Adult males have a dark head with a green sheen, a white neck with a rusty breast, a black back and white underparts.

Adult females have a rusty head and a greyish body.

Juveniles are like the female, but lack the white collar and have a smaller white wing patch. 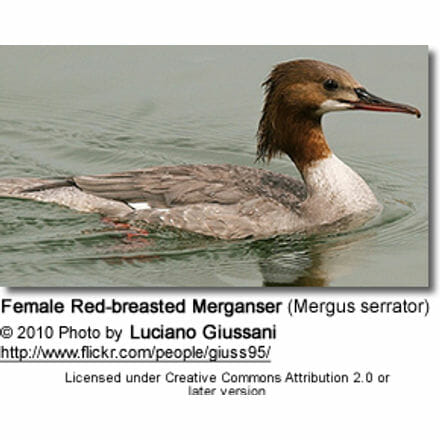 The call of the female is a rasping prrak prrak, and the male gives a feeble hiccup-and-sneeze display call. 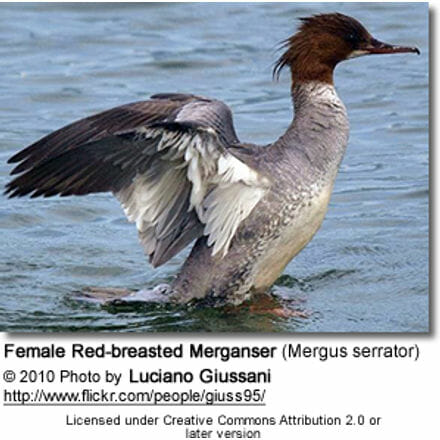