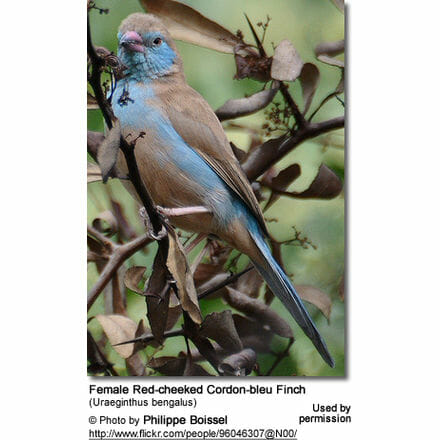 They are found in the drier regions of tropical sub- Saharan Africa, where they are common and widespread across much of central and eastern Africa. They are mostly absent from the northern half of the country.

The natural range of the Red-cheeked Cordon-bleu stretches from southwestern Mauritania south through the countries of Senegal, Gambia east through southern Mali, southern Niger in Western Africa; through southern Chad and southern Sudan in Central Africa, east through Ethiopia, northwestern and southwestern Somalia in East Africa, south to the southern Democratic Republic of the Congo and eastern Angola, east to northern and western Zambia, southern Tanzania and northern Mozambique in southern Africa.

These finches have also been introduced to the Hawaiian islands, where they are specifically found on the islands of Hawai?i (The Big Island) and Oahu (the third largest and most populated of the Hawaiian Islands).

One single record of 1924 exists in Cape Verde located in the central Atlantic Ocean off the coast of Western Africa and another one in the Maadi area in northern Egypt (mid-1960s). These are believed to be escaped cage birds.

They inhabit open grassland, savanna, bush or wooded areas and cultivated lands, generally avoiding forest interiors. They are found at elevations from 7,970 ft (2,430 m). They are also commonly found around human habitation, including suburban gardens. The four races are similar, with some differences in the amount of blue and underparts of the females.

Immature birds resemble females, except for …

Several mutations have occurred in captivity (including the attractive “pied” mutation featured below).

Red-cheeked Cordon-bleus mostly feed on grain, grass seeds and other seeds, as well as millets. Occasionally, they also eat beeswax.

When raising young in particular, they also take insects – as the chicks require a diet rich in protein to support their rapid growth.

Their large, dome-shape nests are constructed out of twigs and other plant material with a side entrance. These nests are usually placed in trees or bushes.

Red-cheeked Cordon-bleus are very popular in aviculture and are commonly kept in aviaries.

Unlike most other finches, which usually roost inside next boxes or in sheltered areas, the Red-cheeked Cordonbleus generally like to roost on open branches, which makes them susceptible to low temperatures.

For nesting, they usually accept the readily available finch nest boxes – although nest box preferences will vary depending on what the parents themselves were raised in.

During the breeding season, males can get quite aggressive towards other males.

These finches are not tolerant to nest inspections or disturbances in general when nesting, and often abandon any eggs or chicks. This should also be taken into consideration with respect to placement of the aviary.

Both the males and the females sing; although the males’ are usually more complex and generally longer, and they sing more often than females. Their contact calls are thin, high-pitched tsee-tsee and their songs are described as wit-sit-diddley-diddley-ee-ee.