The Red-eyed Vireo, Vireo olivaceus, has been one of the most abundant birds in North America, although its numbers seem to have declined recently – possibly as a result of the destruction of wintering habitat in the neotropics, fragmentation of northern breeding forests, or other causes.

The Yellow-green Vireo, Vireo flavoviridis, of Central America is sometimes considered to be a subspecies of Red-eyed Vireo.

They are very rare in California, Arizona, and southern Texas; and winters in South America.

The Red-eyed Vireo is a Neotropical migrant that makes its way from its home in Central and South America to the deciduous woodlands of North America to select a territory, win a mate and raise its young.

The female builds a cup nest of bark, grass, spider webs and other plant materials in deciduous or coniferous trees or shrubs 5 to 10 feet above the ground, but sometimes as high as 60 feet. Three to 5 eggs are produced. Both the male and the female feed the young, who leave the nest after about 12 days.

They are fiercly protectively of their nests and can intimidate even the large Pileated Woodpecker. 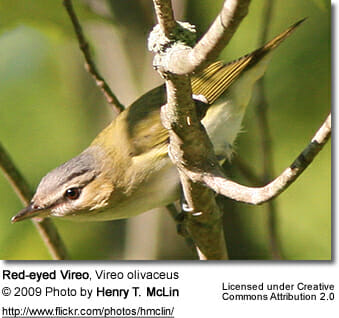 Adults are mainly olive-green on the upperparts with whitish underparts. They have red eyes and a grey crown edged with black. There is a dark line through the eyes and a white stripe just over them. They have thick blue-grey legs and a stout bill. They are yellowish on the flanks and under their tail. Their crown is gray. They have red eyes (eye dark in immature); no wing bars.

The Warbling Vireo is similar, but lacks gray crown and black border over bold white eyebrow. 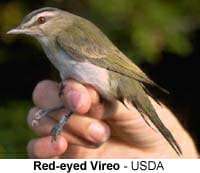 About 85 percent of its diet consists of insects, such as caterpillars and aphids. Also eats spiders, snails, wild fruits and berries.

A persistent singer during the breeding season, the Red-eyed Vireo utters its endless series of short phrases from dawn till dusk, even on the hottest days when other birds are silent.

The three South American races have a simpler song, and a different wing formula.