The Red-headed Woodpeckers (Melanerpes erythrocephalus) are found in most parts of the eastern-central United States stretching north into southern Canada.

Northern birds migrate to the southern parts of the range, with most having arrived on the breeding range by late April, and having left for winter quarters by late October; southern birds are often permanent residents.

There are three recognized subspecies:

The Red-headed Woodpecker is a small or medium-sized woodpecker. Adults have a black back and tail with a red head and neck. Their underparts are mainly white. The wings are black with white secondaries (shorter, upper “arm” feathers).

Adult males and females look alike. Juveniles are similarly shaded, but are mottled with brown. 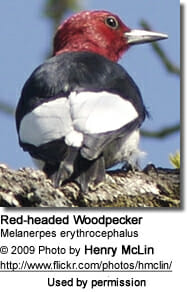 The breeding season starts in early May.

The average clutch size consists of four to seven eggs which are incubated for about two weeks.

Two broods can be raised in a single nesting season.

They catch insects in mid air or on the ground, forage on trees or gather and store nuts. They are eat insects, seeds, fruits, berries, nuts, and occasionally even the eggs of other birds. Although two thirds of their diet is made up of plant material. 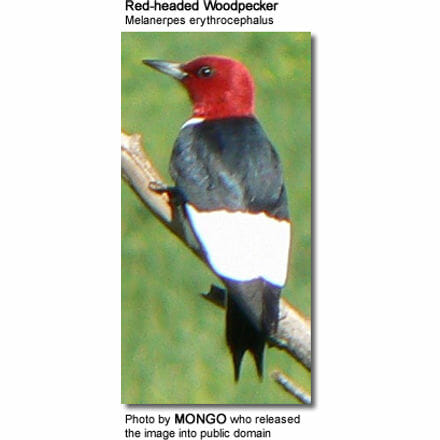 They give a “tchur-tchur” call or drum on territory.

This species was once abundant within its rangem, but populations have considerably declined since 1966 due to increased nesting competition from starlings and removal of dead trees (used as nesting sites) from woodlands. This woodpecker has disappeared from many Northeastern states..

It is now listed as a vulnerable species in Canada and as a threatened species in some states in the US. Its numbers declined due to habitat destruction.