The Red Junglefowl, Gallus gallus, is a tropical member of the Pheasant family and the direct ancestor of the domestic chicken.

It was first raised in captivity at least 5,000 years ago in India, and the domesticated form has been taken all around the world as a very productive food source for both meat and eggs, which some breeds have been specifically developed to produce.

The range of the true species stretches from northeast India (where the pure species has almost certainly been diluted with back-crosses from domestic breeds) eastwards across southern China and down into Malaysia and Indonesia. 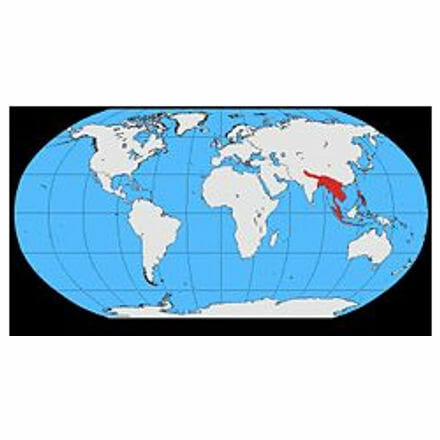 Each of these various regions had its own race or subspecies such as:

Males are much larger; they have large red fleshy wattles on the head and long, bright gold and bronze feathers forming a “shawl” or “cape” over the back of the bird from the neck to the lower back. The tail is composed of long, arching feathers that initially look black but shimmer with blue, purple and green in good light.

The female’s plumage is typical of this family of birds in being cryptic and designed for camouflage as she alone looks after the eggs and chicks. She also has no fleshy wattles on the head.

During the breeding season, the male birds announce their presence with the well known “cock-a-doodle-doo” call. This serves both to attract potential mates and to make other male birds in the area aware of the risk of fighting a breeding competitor. The lower leg just behind and above the foot has a long spur for just this purpose. Their call structure is complex and they have distinctive alarm calls for aerial and ground predators to which others react appropriately.

Flight in these birds is almost purely confined to reaching their roosting areas at sunset in trees or any other high and relatively safe places free from ground predators, and for escape from immediate danger through the day.

Current research testing the genetic integrity of this species across its natural range appears to prove that the pure form is quite rare and may even be extinct, only represented in the wild by birds with various degrees of back crossing with domestic selections (breeds) of the species.

Genetic pollution and threat of extinction

These beautiful pheasants are fairly easy to breed. They should be a spacious, well-planted aviary with about 40 sq.ft. (~12 m2) of available space.

They start breeding in their second year and the breeding season in the U.S. usually starts in March and goes on until July. The female lays 12 to 24 eggs, which she incubates for 20 to 21 das.

Breeding and Caring for your Pheasant