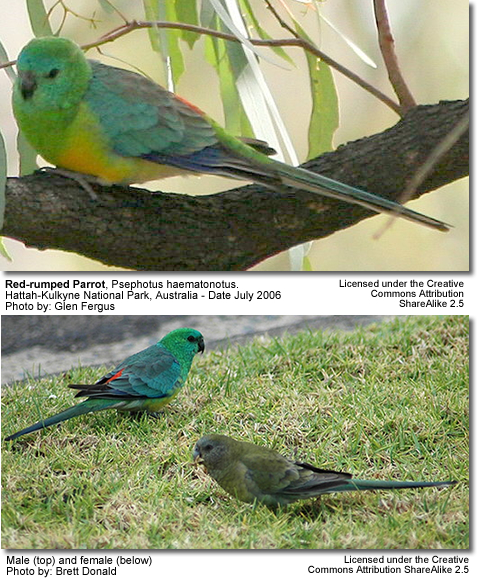 The Red-rumped Parrot, Psephotus haematonotus, is common in south-eastern Australia, particularly in the Murray-Darling Basin. There were also sightings further east of their normal range (Cabarita, Sydney).

This parrot is listed as CITES II – endangered species.

Red-rumped Parrots can be found in pairs or flocks in open country with access to water. They avoid the coast and the wetter, more heavily timbered, areas. Clearing of large tracts of forest and the provision of water for stock has probably extended their range. They often visit suburban parks and gardens.

Like all parrots, red-rumps nest in tree hollows or similar places, including fence posts and stumps.

These parrots spend a great deal of time feeding on the ground, often calling to one another with an attractive chee chillip chee chillip.

In Australia, breeding usually takes place in spring (August to January). However, in the dryer inland areas, breeding can occur at any time of year in response to rainfall.

The average clutch consists of 4 to 7 eggs, which are incubated for 17 to 20 days.

Should you be interested in breeding or keeping those birds, please refer to the below for information. 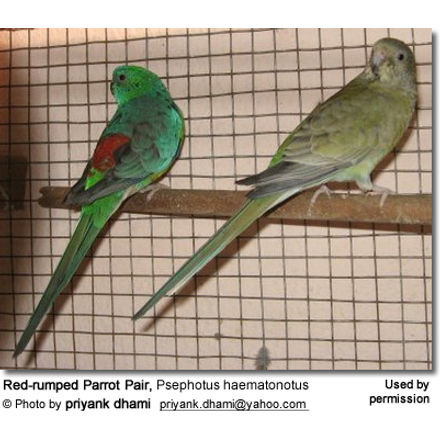 Photos and below information courtesy of Mandy and Paul – Breeder of Canaries and Other Exotic Birds – Singing Wings Aviary – www.singing-wings-aviary.com (A great source for these colorful parrots)

A good Red Rump diet consist of mixed canary seeds, millets, and a small amount of sunflower seeds. A lot of people use a Parakeet mix and add in some Sunflower seeds. They also seem to be fond of Cockatiel mix. If you use a Cockatiel mix try to buy it without fillers such as maize or dog food as most cage birds won’t eat these anyway. To condition our birds we coat the seed mixture with Wheat Germ Oil (1/2 tsp per pound of seed). It helps prevent egg binding and provides vitamins. Fresh water, cuttlebone, oyster shell and grit should be supplied at all times. We provide other supplements such as Petamine breeding formula (during breeding season) and Feather Up (while molting) in small treat cups. Lettuce, spinach, chickweed, peas, green beans, corn, spray millet, eggfood, soaked seed, apple, broccoli tops and carrot tops can also be offered on a regular basis. Be sure to wash all fruits and veggies before allowing birds to consume them!

Red Rumps can be aggressive and are best kept alone or in single pairs.

They can be housed in breeding cages or aviaries. Red Rump Parakeets can tolerate low temperatures of 40 degrees if naturally acclimatized to it over a period of time but if they are suddenly removed for warmer temps and placed into cold climate they can become ill. I would suggest a minimum breeding cage space of 32 inches long x 20 inches high x 20 inches wide. We breed our Red Rumps in tier-style box cages made of 1 inch x 1/2 inch welded wire. Do not house them in round cages.

Compared to most Parakeets, Red Rumps have a pleasant sounding call which could almost be considered a song. It is much softer than the sounds of Budgies (Parakeets) and can be very melodious and almost chime-like.

Our experience with Red Rumps is that they are easy breeders and make good beginner birds for people just starting to breed Grass Parakeets. They seem to prefer vertical nest boxes. We supply our Red Rumps with boxes 10in x 6in x 6in that have a concave bottom with a little aspen shavings so the eggs cannot roll all over.

When in breeding condition the male can be seen side stepping from one side of the perch to the other calling at the hen. Then he will raise to his full height, lean forward and fan his tail while bobbing his head. The male feeding the hen is a sure sign of eggs soon to come. After mating has taken place the hen will lay 4-6 eggs. For the most part the hen does the majority of the incubating while the male guards the nest. The male will relieve the hen to drink and eat or will feed her himself. Some males will at times incubate with the hen. The eggs hatch after 20-25 days of incubation and the babies are covered in a soft white down. Below is a photo of a baby. Red Rumps can and will breed all year if allowed so be sure to give them sufficient rest especially during hotter and colder months. I would only breed those which are 1-5 years of age. Baby Red Rumps can be pulled out of the nest at 3 weeks old in order to hand feed them. I see no reason why they need to be pulled before 3 weeks unless the parents are not caring for them correctly. If not pulled from the nest young birds will fledge at five weeks old and become independently weaned at 7-8 weeks.

Description: As Red-rumped Parrots (Haematonotus) – photos above, but the plumage generally much paler and more bluish; back and nape pale greenish-blue; lower back pale orange-red; middle tail-feathers with marked pale blue tinge; smaller. Female as haematonotus, but plumage generally much paler and more greyish; back and nape grey; smaller. Immatures with same distingusishing features as nominate form. They average 10 inches (25 cm) in length.