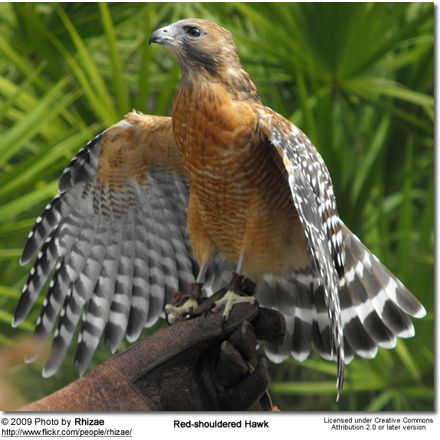 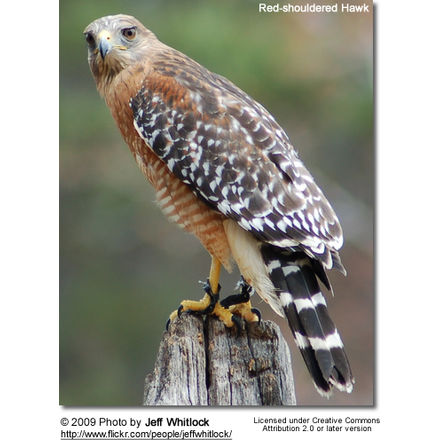 The Red-shouldered Hawk, Buteo lineatus, is a medium-sized hawk.

Its breeding range spans eastern North America and along the coast of California and northern to northeastern-central Mexico.

Adults have a brownish head, a reddish chest, and a pale belly with reddish bars. Their tail, which is quite long by Buteo standards, is marked with narrow white bars. The red “shoulder” is visible when the bird is perched as seen in the image to the right. These hawks‘ upper parts are dark with pale spots and they have long yellow legs.

Western birds may appear more red while Florida birds are generally paler. The wings of adults are more heavily barred on the upper side.

Juvenile Red-shouldered Hawks are most likely to be confused with juvenile Broad-winged Hawks, but can be distinguished by their long tail, crescent-like wing markings, and a more flapping, Accipiter-like flight style. 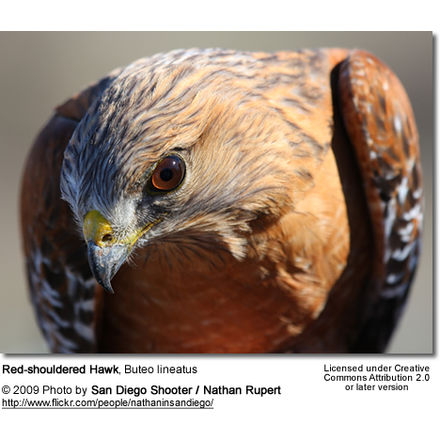 Their breeding habitat is deciduous and mixed wooded areas near water in eastern North America and along the coast of California and northern Mexico. They build a stick nest in a major fork of a large tree.

These birds are permanent residents throughout most of their range; northern birds migrate to more southern parts of their range.

These birds are permanent residents throughout most of their range, though northern birds do migrate mostly to central Mexico. The major modern threat to these birds is deforestation, which has eliminated these birds as breeders in some areas. 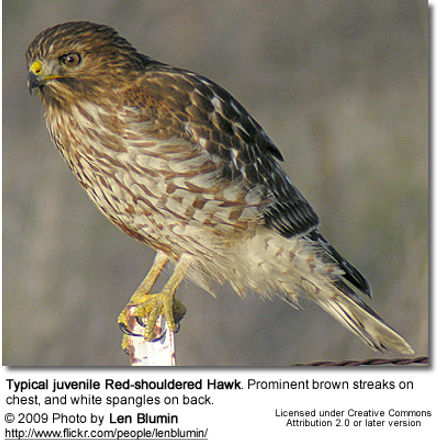 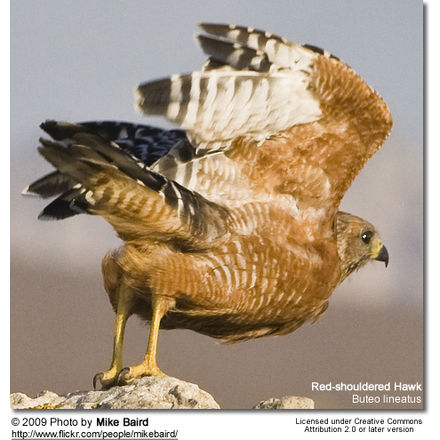 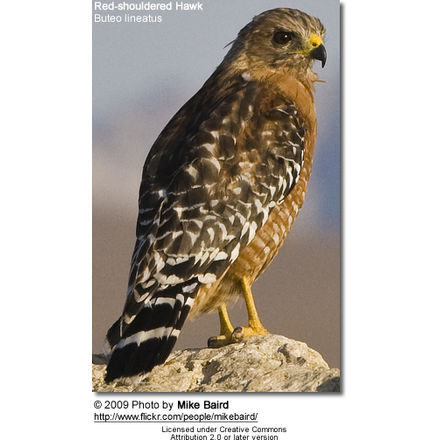 While in forested areas, these birds typically wait on a perch and swoop down on prey. When in clearings, they sometimes fly low in order to surprise prey.

Small mammals are typically the most important prey, with voles, mice and chipmunks locally favored.

During winters, they sometimes habituate to preying on birds commonly found at bird feeders, such as House Sparrows, Mourning Doves, and European Starlings.

They are quite vocal, especially during spring courtship. 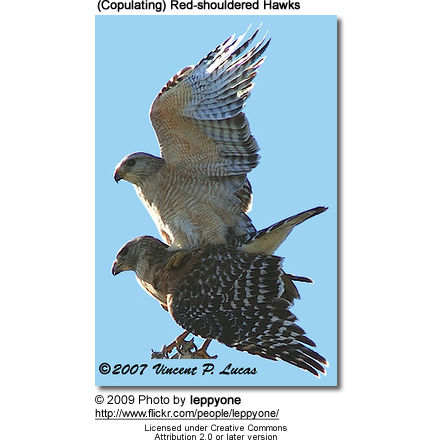 Their breeding habitats of the Red-shouldered Hawk are deciduous and mixed wooded areas, often near water. It is while establishing territories that the distinctive, screaming kee-aah call (usually repeated 3 to 4 times) of this bird is heard.

The young leave the nest at about six weeks of age, but remain dependent on the parents until they are 17 to 19 weeks old.

Predators of eggs and birds of all ages include Great Horned Owls, Red-tailed Hawks, Peregrine Falcons, raccoons, martens, and fishers (adults are vulnerable to the mammals only while nesting).

Red-shouldered Hawks sometimes collaborate and peaceably co-exist with American Crows (usually an enemy to all other birds because of their egg-hunting habits) in order to mob Great Horned Owls and Red-tailed Hawks. 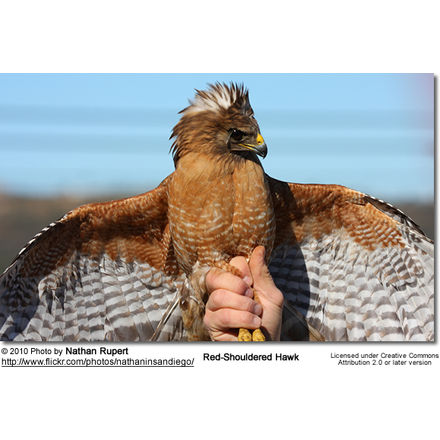 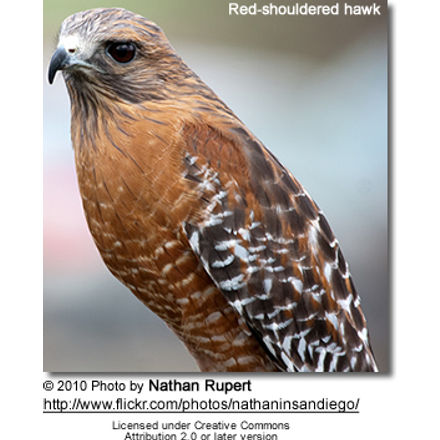 The Red-shouldered Hawk is a member of the genus Buteo, a group of medium-sized raptors with robust bodies and broad wings. Members of this genus are known as buzzards in Europe, but hawks in North America.

There are 5 recognized subspecies of Buteo lineatus, which vary in range and in coloration: 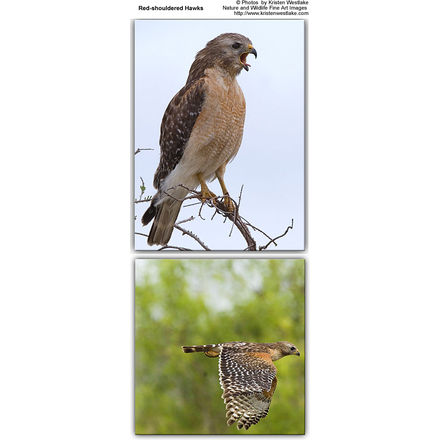 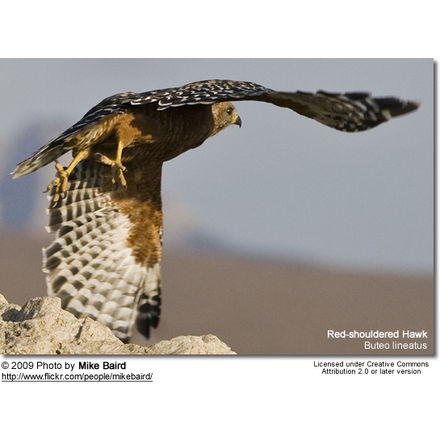 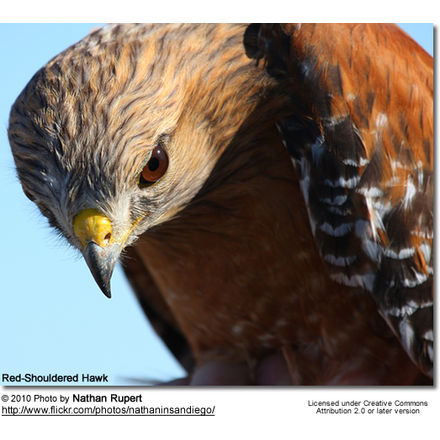