The Relict Gull, Larus relictus, is a medium-sized gull which breeds in two locations in Kazakhstan, one in Russia, several in Mongolia, and one in China.

Small numbers appear to migrate to South Korea during the nonbreeding period. There is additional evidence that larger numbers may migrate to eastern China as well, but this is not verified.

The Relict Gull was believed to be an eastern version of the Mediterranean Gull until 1971.

The population is estimated to be at 10,000 or less, with numbers dropping. It is classified as “vulnerable” on the IUCN Red List.

The gulls breed in colonies on islands in saltwater lakes. These sites are fragile. Nesting does not occur when lakes dry up or when water levels are too high.

When islands become too small or overgrown with vegetation or so large that they join at the shore, the birds do not nest either. During non-breeding periods, the birds can be found on estuarine mud and sandflats.

The largest threats to Relict Gull success are the aforementioned water-level changes, predation from other gulls, and hailstorms and flooding. Human disturbance has increased vulnerability to all of these, resulting in further risks for the gulls and increased mortality for chicks and eggs.

To combat this, nature reserves in Russia, Kazakhstan, and Mongolia have been established, such as at Lake Alakol.

Breeding birds have black-hoods (including nape) with gray-brown foreheads, and broad, white, half-moon coloring behind, below, and above their eyes. Their legs are orange and their bills scarlet. 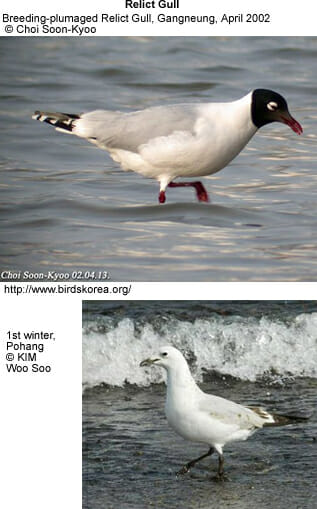