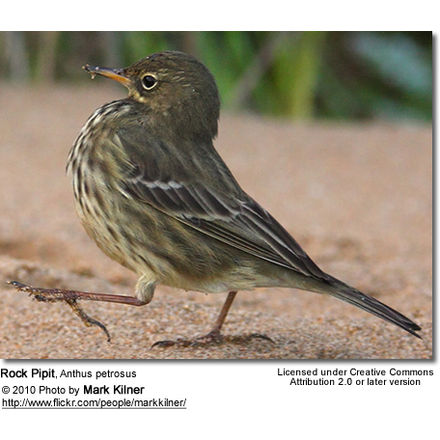 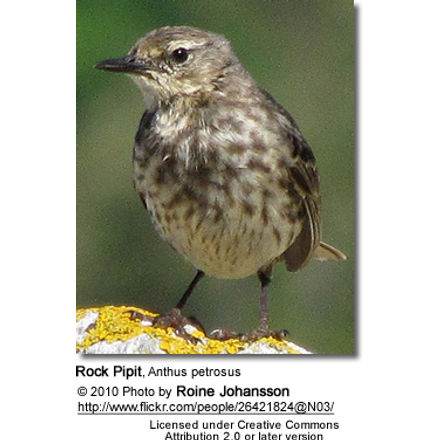 The Rock Pipit, Anthus petrosus, is a small passerine bird species which breeds on rocky coasts of western Europe northwards from Brittany. It is mainly resident in Ireland, Great Britain and France, in the west of its range, but the Scandinavian and Russian populations migrate south in winter; individuals sometimes stray into inland Europe. In Saxony it is a rarely-seen visitor for example; the Staatliches Museum für Tierkunde Dresden has but a single specimen (C 13347), a male shot at Dresden as long ago as 8. Oktober 1894.

It was formerly included within its putative sister species, the Water Pipit (A. spinoletta), as was their slightly more distinct Pacific relative the Buff-bellied Pipit (A. rubescens).

Like most other pipits, this is an undistinguished looking species on the ground, mainly dark brown above and heavily streaked buff below. It has dark legs, pale grey outer tail feathers and a longish dark bill. Its dark plumage is an adaptation to the rocky coasts on which it breeds and winters.

West European birds (subspecies A. p. petrosus, A. p. kleinschmidti and A. p. meinertzhageni) remain dark grey-buff all year. Scandinavian and Baltic Sea birds (A. p. littoralis) are usually indistinguishable from petrosus in winter; they may show pinkish underparts and a pale supercilium in summer, resembling the Water Pipit (A. spinoletta). Vagrant birds in winter are easily distinguished from Water Pipits but impossible to assign to subspecies by appearance and measurements. However, the western populations are known to be nearly sedentary, so east of the Elbe basin vagrant Rock Pipits are presumably mostly littoralis.

Rock Pipits tend to be found along rocky coasts, whereas Water Pipits favour damp grassland. While they may be occur in the same general area occasionally, they are rarely found in the same habitat. The Rock Pipit is a much more approachable bird than the Water Pipit. If startled, it flies a fairly short distance, close to the ground, before it lands again. 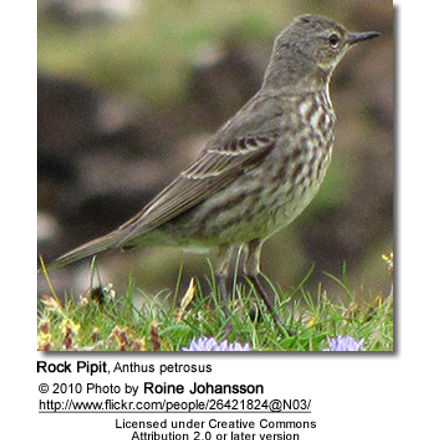 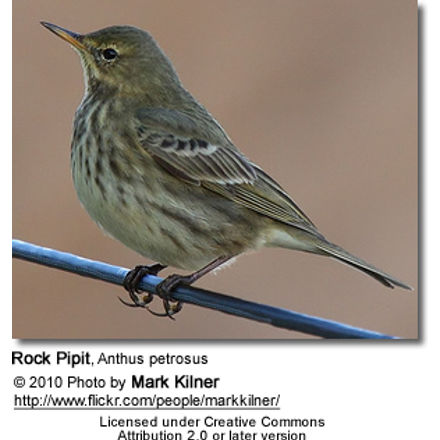 Its call is an explosive fit. The song, as in many pipits, is a series of “blocks” of repeated more or less shrill cheeping single or double notes; it ends on a trill and has usually fewer, but longer-lasting “blocks” (a dozen repetitions or more) than in the Water Pipit.

This species is insectivorous like its relatives, and as usual for Motacillidae seeks out much of its prey on foot. 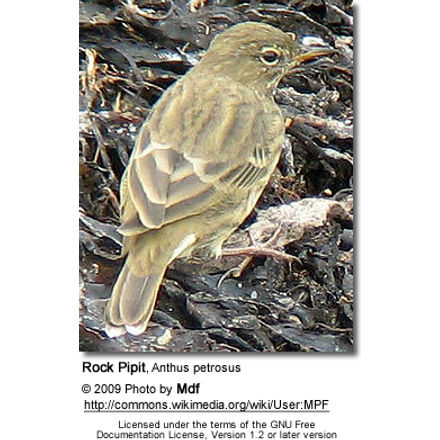