The Roman Tufted Goose is a small domestic ornamental breed of goose that resembles a small Embden goose except for the main distinguishing characteristic – the small tuft of feathers on its head.

There is a Roman breed without the tuft, but they are extremely rare in North America. This is an old type of poultry that is traced back to its origins. 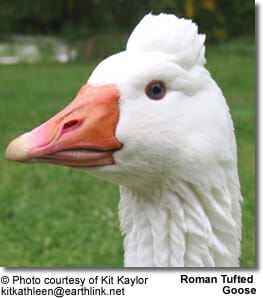 This goose was probably developed in the Danube River Valley (Danube aka Donau is a river that originates in Germany and flows eastwards, passing through several Central and Eastern European capitals, before emptying into the Black Sea).

This is a lighter boned variety that weighs between 10 and 12 pounds. Its plumage is usually white and it has a small tuft on top of its head. Its eyes are blue, the legs are reddish-orangeand the bill is pinkish with a white bean.

Tufts or crests appear fairly often in Roman Geese. In the APA Standard the tuft is required, although nontufted birds are common in the Britain yet rare in the United States.

Both males and females look alike, although males may be slightly larger. DNA sexing is recommended to identify the gender. 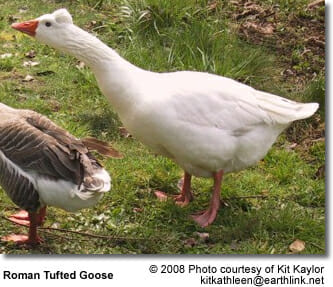 This noble goose has a pleasant, friendly disposition, easily growing confiding with their care takers. They are rather prolific.

As they love to eat bugs, they are great at controlling bugs in your yard. 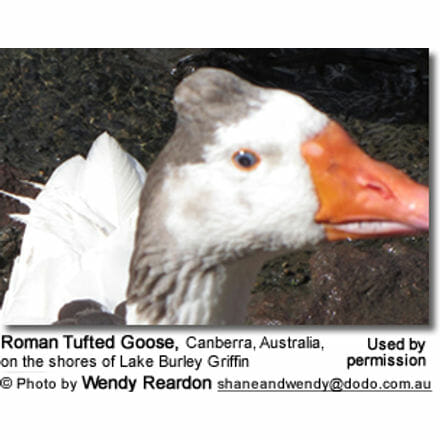 Roman Tufted Geese are considered useful backyard animals, as their primary diet consists of bugs. In addition to being enjoyed as pets they offer a very ecological way of controlling bugs in a backyard.