Ruby-throated Hummingbirds are solitary and only come together to mate. They typically breed between March through August, with peak breeding season occurring in mid-May.

In spring, the males return to the breeding area in central and eastern United States and southern Canada to establish territories before the females arrive. 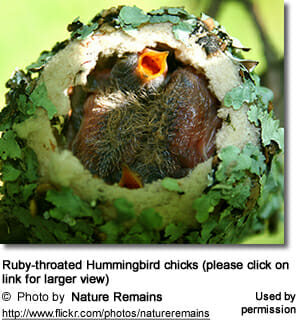 When a female enters his territory, the male performs a courtship display. The Ruby-throated Hummingbird male will flash his red throat feathers and perform a dive display, rising 8 – 10 feet (2.5 – 3 m) above and 5 – 6 feet (1.5 – 1.8 m) to each side of the female in looping dives.

Once the female is perched, the male will very quickly fly back and forth in front of her – in very rapid horizontal arcs less than 1.6 feet (0.5 m).   During this display, the male’s wings beat up to 200 times per second – with normal speed being 55-75 beats per second.

Before mating occurs, the male and female face each other, alternately ascending about 10 feet (3 m) and descending before getting to the actual act of mating.

The receptive female gives a “mew” call and positions herself with her tail feather cocked and her wings drooped allowing the male to mount her for breeding.

After the act of mating, they will separate.

The male will search for other females to copulate with, while the female returns to her breeding territory. In all likelihood, the female will also mate with several males before egg-laying.

There is no pair bond or male parental involvement for this species – the male’s only part in the reproductive process is the actual mating with the female.  The female alone is responsible for nesting and raising the young.

The open cup nest is usually situated in deciduous and pine forests, but can also be found along the forest edges, in orchards or in gardens – sometimes even in odd places, such as loops of chains or on wire. It is usually placed near or directly above water.

The nest is generally constructed on a small, downward-sloping tree limb 10–60 feet (3 – 18 m) above the ground, with an average of about 15 feet (4.5 m). It is typically placed in a protected location in a shrub, bush or tree. Female Ruby-throated Hummingbird may reuse old nests for several seasons, and repair them annually. If none are available, she alone builds a new nest in about 6 to 10 days.

It is made of plant material, spider webs, bud scales and pine resin.

The outside of the nest is decorated with lichens and is strengthened with spider webbing and other sticky material, giving it an elastic quality to allow it to stretch to double its size as the chicks grow and need more room.

Finally, the nest is lined with plant down (often dandelion or thistle down), animal hair and feather down.

The average clutch consists of 1 – 3 white pea-sized (12.9 x 8.5 mm or 0.3 x 0.5 inches) eggs, the average being 2. She lays them about two or three days apart and starts incubating them from day one with only short interruptions for feedings or to chase intruders / potential threats away.  The chicks start hatching about 10 to 16 days later.

The young are born blind, immobile and without any down. The female protects the chicks, and  feeds them  1 to 3 times every hour with regurgitated food (mostly insects since nectar is an insufficient source of protein for the growing birds).

The chicks leave the nest when they are from 18 to 31 days old (growth likely influenced by availability of food), and they will be independent about 4 to 7 days after fledging.

The young reach reproductive maturity when they are about one year old.