The most reliable field mark is the male’s brilliant ruby-red gorget (throat patch), lacking in the females and immature birds.

The tips of the outer tail feathers are white and rounded in females and juvenile males; in adult males, these tips are black and sharply pointed.

Females are up to 25% larger in size than males, and their bills tends to be a little longer as well. 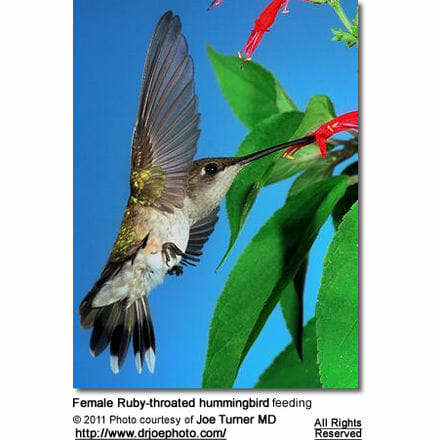 The plumage of both males and females is an iridescent bronze-green on the crown (top of the head), nape (back of the neck), back and middle two tail feathers.

The abdomen is greyish-white; and the wings and outer tail feathers are dark (near-black), with a hint of purple.

They have long, straight and slender beaks.

Adult males have an iridescent ruby-red throat patch, which may appear black from certain angles or in poor lighting.

The back is metallic green, the under plumage is whitish. They have grey chins. Their sides are green.

His tail is slightly forked and dark colored (he doesn’t have the white tail tips of the female).

The male is smaller than the female, and has a slightly shorter beak. 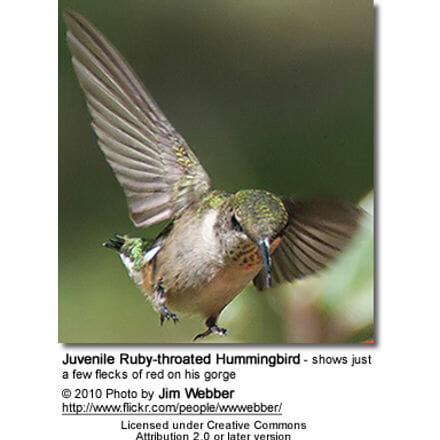 Adult females are larger than the male and have a longer bill. Like the male, she has a metallic green back. Her sides are brownish in color (the male’s are greenish).

Her tail is rounded with tips on the outer feathers. She has whitish chest and throat – although some older females may develop a few red feathers on their throat,

Juvenile birds look like the adult female. Immature males may have some dusky streaks on their throats.

As they molt into adulthood (usually by August and September), an increasing number of metallic red feathers can be seen on their throat (the beginning of their flashy ruby-red, male throat patch). During their first molt (before the next breeding season), the young will have attained their adult plumage. 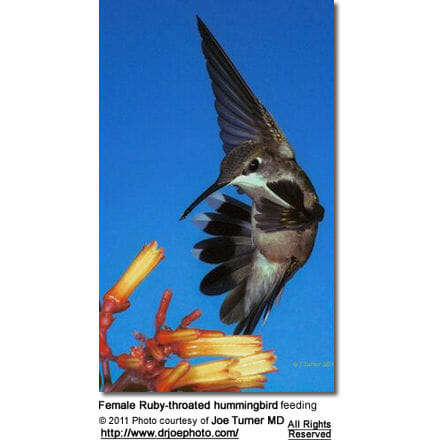 Several North American hummingbirds have red throats and are sometimes mistakenly referred to as “ruby-throats; including the male Broad-tailed Hummingbird which breeds in the Rocky Mountains of the United States and superficially resembles the male Ruby-throated Hummingbird.

These birds are solitary. Adults of this species typically only come into contact for the purpose of mating and during territory confrontations.