The Ruby-throated Hummingbirds primarily feed on nectar taken from over 30 plant species – favoring those with red, long, tubular flowers with dilute nectar. They typically choose flowers with the highest sugar content (often red-colored and tubular-shaped) and seek out, and aggressively protect, those areas containing flowers with high-energy nectar.

Many native and cultivated plants on whose flowers hummingbirds feed heavily rely on them for pollination. As the hummingbirds thrust their long bills deep into the flowers for nectar their faces are dusted in pollen, which they then carry to the stigma of a nearby similar plant. The mostly tubular-shaped flowers actually exclude most bees and butterflies from feeding on them and, subsequently, from pollinating the plants.

In winter, when flowering plants may not be readily available, they often drink the sap from holes created by sapsuckers, as a substitute for nectar. They may also visit local hummingbird feeders for some sugar water. Ruby-throats males generally display aggressive territoriality toward rival hummingbirds, other birds, and even insects such as bees, butterflies, and sphinx moths near their favorite feeder. However, if there is plenty of food to go around, they may occupy territories only 50 feet apart.

Ruby-throated Hummingbirds become accustomed to humans quickly and may even approach them inquisitively, particularly when they are wearing red articles of clothing – a color that they have come to learn to associate with food. The hummingbird that claims a feeder as part of his territory may spend a good part of the day perched nearby, guarding the food source against intruders. Although the below image suggests that males may allow females to feed from their feeders.

A female will tolerate her own young at her favorite feeder for a short period after fledging, but she will soon treat them as rivals.

The male and female’s level of aggression heightens in late summer to early fall, as they need to fatten up for migration This is vital for their survival, as they have to cross the Gulf of Mexico to reach their wintering destination. This requires a 500 mile, non-stop flight over water and the caloric energy needed for that far exceeds an adult hummingbird’s body weight of 3 – 4 grams.

They also take some small spiders and insects, including mosquitoes, spiders, gnats, fruit flies (genus Drosophila) and small bees – important sources of protein particularly needed during the breeding season to ensure the proper development of their young. Insects are often caught in flight (hawking); snatched off leaves or branches, or are taken from spider webs. A nesting female can capture up to 2,000 insects a day.

During the winter months, migratory hummingbirds eat more insects than nectar. It is assumed that this change in diet is necessary to gain the extra weight needed for the long migration. In fact, Ruby-throated Hummingbirds often double in weight allowing them to fly nearly 600 miles without having to stop for food.

Ruby-throated hummingbirds get all the water they need from the nectar they drink. They do not need to drink water. 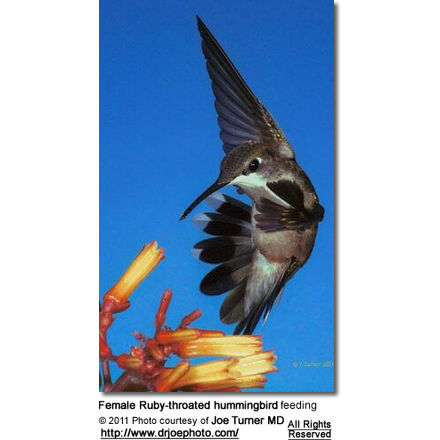 With the exception of insects, hummingbirds have the highest  metabolism rate of any animal on earth (high breathing rate, high heart rate, high body temperature).

Because of their “extreme” metabolism, the active hummingbirds require frequent feedings throughout the day – every ten to fifteen minutes and potentially visiting 1,000 flowers a day, lapping up nectar at the rate of 13 licks per second. They have to eat up to half of its body mass and drink roughly eight times its body mass each day.

The hummingbird has the largest heart in proportion to its body – and has the highest heartbeat rate. Their hearts pump about 1,200 times per minute in flight and 200 beats per minute at rest– making it the fastest beating heart of all animals – except for the pygmy shrew with a recorded heartbeat of up to 1511 times per minute. (A shrew is a small animal that resembles a mouse – it occurs in Asia.) Their wings beat seventy times each second; and their hovering flight used by them to gather nectar requires staggering amounts of energy. Their daytime body temperature ranges from 105° to 108°F (40.5° to 42.2°C). To survive, hummingbirds must eat several times their weight in nectar every day.

To conserve energy at night when they are not feeding, their bodies go into a state of torpor (temporary or semi-hibernation). During this time the hummingbird’s body temperature drops down dramatically from its daytime temperature of about 105° (40.5°C) to 19 °C (66 °F) and the heart rate slows down from about 200 (average daytime resting heart rate per minute)to 50 – 180 beats per minute. Hummingbirds may even stop breathing for periods of time. This allows hummingbirds to use up to 50 times less energy than they would need during their daytime activities. During this time, the hummingbirds cling to a branch and sit almost lifeless; sometimes their feet (which are known to be quite weak) will loosen their grasp enough to swing downwards and hummingbirds remain hanging upside down on the branch until the next morning or until they become alert when approached. People may even find semiconscious hummingbirds on branches, window sills or in garages, and when picked up, the warmth of hands is often enough to revive them, and they will buzz off in perfect health.

This so-called “suspended animation” also enables hummingbirds to survive cold nights or any time that food might be scarce. At sunrise, the body temperature goes back up (which can take a few minutes up to an hour), and they will resume their normal activities – typically feeding before doing anything else. However, whether or not hummingbirds become torpid depends on their diet, health and type of activity they are engaged in (Long, 1997). For example, nesting female hummingbirds do not enter torpidity when incubating eggs as they need body heat to keep the eggs warm.