The Ruffed Grouse is frequently referred to as the “partridge”. This is technically wrong – partridges are unrelated phasianids, and in hunting may lead to confusion with the Grey Partridge. That species was introduced to North America from Europe; it is a bird of open areas, not woodlands.

The Ruffed Grouse is also the state bird of Pennsylvania. 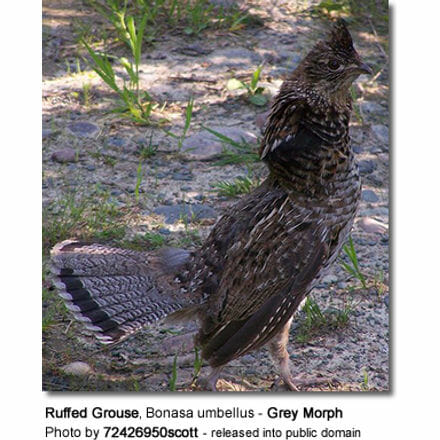 The Ruffed Grouse, Bonasa umbellus, is a medium-sized grouse occurring in forests from the Appalachian Mountains across Canada to Alaska. It is non-migratory.

In the grey morph (genetic mutation), the head, neck and back are grey-brown; the breast is light with barring. There is much white on the underside and flanks, and overall the birds have a variegated appearance; the throat is often distinctly lighter. The tail is essentially the same brownish grey, with regular barring and a broad black band near the end (“subterminal”).

Brown-morph birds have tails of the same color and pattern, but the rest of the plumage is much browner, giving the appearance of a more uniform bird with less light plumage below and a conspicuously grey tail.

There are all sorts of intergrades between the most typical morphs; warmer and more humid conditions favor browner birds in general.

The ruffs are on the sides of the neck in both genders. They also have a crest on top of their head, which sometimes lies flat. Both sexes are similarly marked and sized, making them difficult to tell apart, even in hand.

Like most grouse, they spend most of their time on the ground, and when surprised, may explode into flight, beating their wings very loudly. Mixed woodland rich in aspen seems to be particularly well-liked. These birds forage on the ground or in trees. They are omnivores, eating buds, leaves, berries, seeds, and insects. According to Don L. Johnson:

“More than any other characteristic, it is the ruffed grouse’s ability to thrive on a wide range of foods that has allowed it to adapt to such a wide and varied range of habitat on this continent. A complete menu of grouse fare might itself fill a book […] One grouse crop yielded a live salamander in a salad of watercress. Another contained a small snake.”

In spring, males attract females by drumming, beating their wings loudly, often while on a fallen log. Females nest on the ground, typically laying 6–8 eggs. 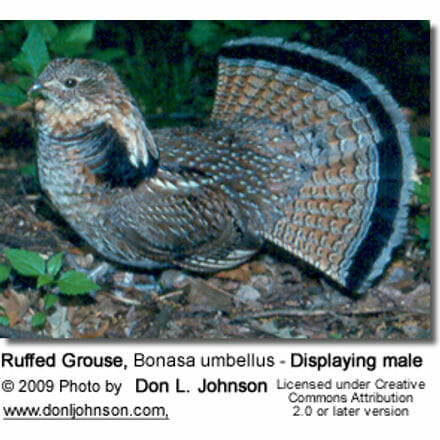 Population densities across the continent have declined severely in recent decades, primarily from habitat loss. In Canada, the species is generally widespread, and is not considered globally threatened by the IUCN.

Many states in the U.S. have open hunting seasons that run from September through January, but hunting is not considered to be a significant contributing factor in the population decline.

On the other hand, it apparently absolutely requires significant tract of forest, at least part of which is older growth, to maintain stable population for any length of time.

The species used to occur in Seneca County, Ohio and similar woodlands of the northern U.S., but disappeared locally not long after most of these forests were cut down. Isolated populations are prone to succumb to hunting – in Seneca County, the last recorded Ruffed Grouse of the original population was shot in the autumn of 1892 for example.

In addition, the species, like many grouse, undergoes regular population cycles of 10-12 year on average. Numbers of Ruffed Grouse increase and decline, not seldom by a factor of five, and occasionally by a factor of ten; the reasons are not well known.

Ruffed Grouse are prolific and populations can be easily boosted by restocking. In some cases, even locally extirpated populations have been restored. Population cycles must be taken into account, so that restocked populations will have built up sufficient numbers before the downward cycle begins.

Also, though in theory this species could sustain heavy hunting pressure because of its ability to produce many offspring, ample woodland must be present to allow sustained hunting without the risk of population collapse.

It may well be that hunting is most efficient when population cycles are taken into account, granting the birds two years closed to hunting to recover from the lowest stock, and allowing far more than the usual numbers to be taken during bumper years.

“Hunting of the ruffed grouse is common in the northern and far western United states as well as Canada. Often done with shotguns. Dogs may also be used.

Hunting of the ruffed grouse is usually very rigorous. This is because the grouse spends most of its time in thick brush and second growth pines. It is also very hard to detect a foraging grouse bobbing about in the thicket.

This is because their deceptive plumage hides them very well in a variety of conditions, though when snow is present it may become a lot easier. Like other forest creatures, the ruffed grouse will maintain trails through the underbrush and pines.

These can often be found by looking for the feathers of the bird on the ground and on twigs at the edges of its trail. Hunting of the ruffed grouse requires a good ear and lots of stamina as you will be constantly walking and listening for them in the leaves.” – Joseph B. Barney

The Ruffed Grouse Society is a non profit organization dedicated exclusively to creation and maintenance of young-forest habitat, which is essential for the survival of the species as well as other wildlife, such as songbirds.