This species is considered endangered due to the rapid loss of its rainforest habitat.

The adult Rufous-collared Kingfisher (Actenoides concretus) is a medium-sized bird with a generously proportioned head. It has a shaggy crest, large, thick bill, blue head and back, and white throat and collar. Its underbody is white with band of blue across its chest.

The male does not have a rufous band across its white abdomen; however, his flanks may be rufous (rufous coloring is a reddish-brown or rust). He may have some red in his blue chest band.

The female’s flanks contain some rufous coloring, and the band across her chest below the blue band is often rufous as well. Some feather tips along the blue breast are rufous. 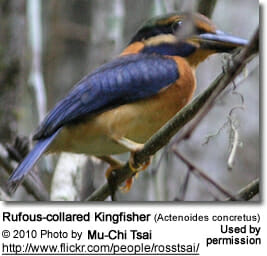 They have a well developed vision. Their dark brown eyes are able to see colors distinctly and are even capable of binocular vision. They are able to move their eyes within the eye sockets rather than having to rotate their entire heads to follow their prey. An unusual adaptation they possess is the ability to compensate for the water’s refraction and reflection as they search for prey underwater. This makes the fish look closer to the surface than it is. They have accurate depth perception as well. Nature has provided the Kingfishers with a great deal of ocular protection. Their nictitating membranes protect their eyes when they hit the water.

The Kingfisher will stab its prey, either with the bill closed or open, depending on the size of the prey. Kingfishers of all three families kill their prey by beating them on the ground or perch to shatter the bones. Then they work the fish into their mouths, head first, so that they won’t get cut up by the bones or scales as they swallow it whole. They will even consume snakes in this manner! They can eat prey that seems too large to fit in their mouths.

Cleanliness is important to Kingfishers; they will dive into the water to bathe, then fly to a perch to preen and dry their feathers in the sunlight. Some will even clean their heads using their wings. They will utilize a branch to clean their impressive bills, keeping them in excellent condition.

The Kingfishers are cavity-nesters. They create tunnels by digging into the ground on the banks of the waterways. They will nest, not only in these natural earthen banks, but in man-made ditches as well.

The nests are constructed by both males and females. They will take turns burrowing out a tunnel with their feet, and then they will hollow out a narrow chamber at the end of the tunnel in which to lay their eggs. The birds will spend between three and seven days working to complete their tunnel. Some birds attack their worksites so forcefully that they have fatally injured themselves as they fly into the tunnels during these excavations. The tunnels of the various species will reach different lengths, depending on their locations. If they burrow into termitarium nests, the tunnels will be shorter; nests built into the soil will be longer. Nests constructed in hard, less penetrable ground will have tunnels that are shorter than those dug into sand or soft soil.

The nesting chamber can measure as much as 8-12 inches wide and 6-7 inches high. There, they lay their eggs and raise their chicks. The average clutch contains three to six eggs, and both parents incubate the eggs.

Initially, the hatchlings are altricial and require feeding by the parents, who bring the food into the nesting chamber. The young grow quickly and soon they are able to travel toward the entrance of the tunnel where they encounter the adults and wait to be fed. Eventually, they are fed on a perch near the entrance. Fledging can last a few days to a few weeks. After that, the chicks will be on their own and will feed themselves.