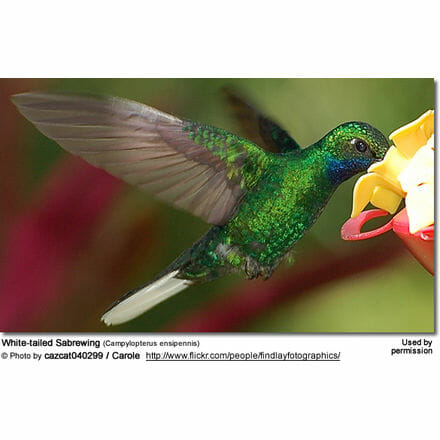 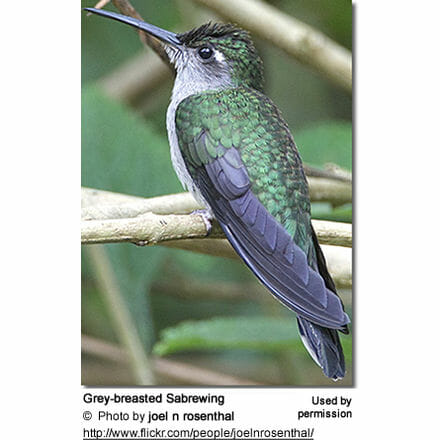 The Sabrewings (Campylopterus) are relatively large hummingbirds that mostly occur naturally in Central and South America (some in Mexico); where they are usually found in the understory and along forest edges – mostly in mountains and near streams.

They are very large compared to other hummingbirds that typically measure 4.7 – 6 inches or 12-15 cm in length.

They were named for their long, sabre-like outermost primary flight feathers, which are thickened, flattened and bent at an angle.. In several species, the three outer pairs of tail feathers have broad white tips.

In some species, males and females look alike; in others, they look very different (i.e. the Violet Sabrewing. 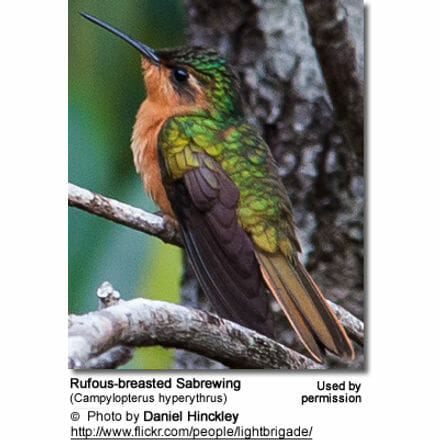 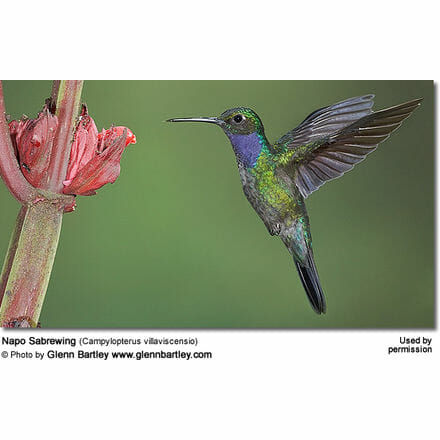 During the breeding seasons, males typically gather in leks (competitive mating display) consisting of up to 10 males (most often 4 to 6). The males will sing to the females to gain their goodwill. They may fly in front of them in a u-shaped pattern.

The female is responsible for building the fairly large cup-shaped nest out of plant fibers woven together and green moss on the outside for camouflage in a protected location in a shrub, bush or tree – usually situated over a stream. She lines the nest with soft plant fibers, animal hair and feather down, and strengthens the structure with spider webbing and other sticky material, giving it an elastic quality to allow it to stretch to double its size as the chicks grow and need more room. The nest is typically found on a low, thin horizontal branch.

The average clutch consists of one white egg, which she incubates alone, while the male defends his territory and the flowers he feeds on. The young are born blind, immobile and without any down.

Theyprimarily feed on nectar taken from a variety of brightly colored, scented small flowers of trees, herbs, shrubs and epiphytes. They favor heliconia and banana flowers; but may also visit some flowers that open during the night for bats.