Their former range also included Egypt, where they were was often mummified as a symbol of the god Thoth.

They inhabit marshy wetlands and mud flats, both inland and on the coast. They may also visit cultivated lands and rubbish dumps.

Sacred Ibises nest in tree colonies, often with other large wading birds such as herons.

Their large stick nests are typically placed in a baobab.

The typical clutch consists of 2 – 3 eggs. It feeds on various fish, frogs, small mammals, reptiles and smaller birds as well as insects.

They survive winters in temperate regions by feeding at rubbish dumps.

The adults measure, on average, 68 cm in length.

The plumage is mostly white, except for the blackish rump and black rear border on the wings that can be seen in flight. .

The featherless head and neck, thick curved bill and legs are black.

Juveniles can be identified by their dirty white plumage, smaller bill and, unlike the adults, they have some feathering on the neck.

Sacred Ibises are mostly silent; but occasionally some croaking sounds can be heard. 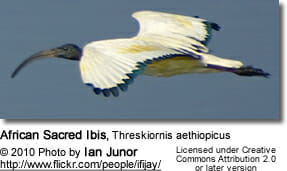