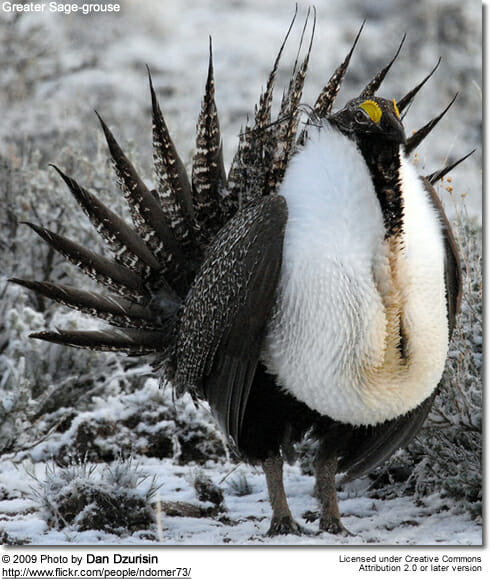 The sage-grouse are the species in the bird genus Centrocercus.

They are also collectively known known as sagehen, sage grouse, sage cock, sage chicken or cock of the plains.

The sagehen is the mascot of the Pomona College and Pitzer College athletic teams of Claremont, California.

They are large grouse from temperate North America.

Adults have a long, pointed tail and legs with feathers to the toes.

Like in most Galliformes, there is pronounced sexual dimorphism (males look different from females).. Centrocercus species are notable for their elaborate courtship rituals. Each spring males congregate on leks and perform a “strutting display.” The male puffs up a large, whitish ball sack on its chest, makes a soft drumming noise, and struts around with his tail feathers displayed and air sack puffed up.

Groups of females observe these displays and select the most attractive males to mate with. Only a few males do most of the breeding.

Males perform on leks for several hours in the early morning and evening during the spring months between February and April. Leks are generally open areas adjacent to dense sagebrush stands, and the same lek may be used by grouse for decades.

Hens build nests and lay and incubate their eggs under the cover of sagebrush. The hen uses grass and forbs between patches of sagebrush for additional cover. 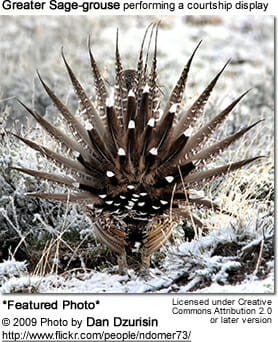 The Mono Basin population may represent a third species.

‘Centrocercus urophasianus’ is pronounced sen-tro-SER-kus YOU-row-faze-ee-AY-nus. The name of the genus is a combination of the Greek ‘kentron’, meaning point, and ‘kerkos’, tail. The specific epithet is from another Greek word for tail, ‘oura’, plus ‘phasianos’, pheasant. The noun ‘pheasant’ was originally applied to a bird that was native to the valley of the Phasis River (now the Rioni River), which drains into the Black Sea from the Republic of Georgia.

In the time of Lewis and Clark the word ‘pheasant’ stood for “a genus of gallinaceous birds,” according to lexicographer Noah Webster (1806), and the explorers often used it in that sense. ‘Gallinaceous’ then referred to “domestic fowls, or the gallinae”; the family Galliformes (Latin ‘gallus’, cock, and ‘forma’, shape) now includes pheasants, grouse, turkeys, quail, and all domestic chickens. Lewis and Clark are credited with the discovery of five gallinaceous birds in addition to the sage grouse: the Columbian sharp-tailed grouse, the dusky grouse, Franklin’s grouse, the Oregon ruffed grouse, and the mountain quail.