The Sandwich Terns (Thalasseus sandvicensis) were named after the place they were first identified in – namely the town of Sandwich, Kent in the United Kingdom. They are also commonly known as Cabot’s Terns.

Within their natural range, they are easily identified by their yellow-tipped black bill and shaggy crests.

They are closely related to the Lesser Crested Tern, Chinese Crested Tern and Elegant Tern – whom they resemble and are easily confused with. Some authorities suggest that all three may be conspecific (one single species).

Sandwich Terns occur naturally on the marine coasts in the New World – specifically the southeastern United States, Central America, Eastern South America, northwestern South America, and the Caribbean, In the Old World, they are found in Western Africa, the Mediterranean region and Great Britain.

In the United Kingdom, they are found along the coasts in North Norfolk, Suffolk, and Dungeness, Kent – usually from late March to September. Many of the major colonies are found on nature reserves.

Sandwich Terns inhabit seacoasts, bays, estuaries, and mudflats; but may also be found out on the ocean. 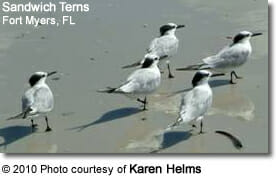 The long, thin bill is black with a pale yellow tip – except in the South American race, which has a yellow or orange-colored bill. The short legs are black.

The plumage is mostly with a pale grey back. It has elongated feathers on the back of the head that have the appearance of a shaggy crest. During the breeding season, it has a black cap on its head; which is pale in the winter plumage. In flight, grey wedges on the wing tips and the short forked tail are most apparent.

The juveniles resemble the non-breeding adults; except for the entirely dusky crown and dark markings on back that give their plumage a scaly appearance – like juvenile Roseate Terns. Their bills may also lack the yellow tip.

Sandwich terns are of breeding age when they are about 3 – 4 years old.

During the courtship ritual, the male feeds the female a fish, which she often swallows immediately. However, occasionally she may keep the fish in her bill throughout the display. Both the male and female are observed flying into the air in tandem with alternated glides.

The male continues to feed the female throughout the breeding season.

Sandwich Terns have been known to interbreed with Lesser Crested Terns.

They usually nest on coasts and islands, but may also nest inland, usually at large freshwater lakes situated close to the coast.

Sandwich Terns are ground breeders and scrape out a nest in the soil. In Florida, they may also make their nest on rooftops. To protect their nests from being washed away they will defecate directly on the rim of their nests. Once the feces dries, it “cements” the nest together in case of flooding or heavy rains.

The hatchlings are covered in a greyish down; their eyes are open and even though they are able to walk, they won’t leave the nest for the first day. After one day, the young usually join a communal crèche, where hundreds and even thousands of chicks congregate. Astonishingly, the parents are able to find their young in the crowd – probably identifying them by their voices — and feed them.

The young fledge (learn to fly) when they are about one month old; however, the parents continue to care for them for 5 – 8 months. The parents migrate to the winter territories with their young.

The eggs are often destroyed by sand crabs; or taken by Laughing Gulls and Ruddy Turnstones. Black-headed Gulls prey on the eggs and chicks.

The diet of Sandwich Terns mostly consists of small fish, such as sand eels, sprats and whitings found around estuaries, lagoons and mangroves. They may also take squid, shrimp and crabs.

When foraging in waters, they have been observed flying several meters above the surface of the water, possibly hovering above the water, before plunge diving for prey. They will also steal food from other terns.

During the breeding season, the male offers the female fish as part of the courtship display.

In the 19th century, its numbers declined drastically due to the feather trade and collecting of their eggs.

In more recent history, its population has recovered and the numbers are now increasing in most of their range.