The Savannah Sparrow, Passerculus sandwichensis, is a small sparrow. It is the only member of the genus Passerculus (Bonaparte, 1838).

This bird was named after Savannah, Georgia where one of the first specimens of this bird was collected.

The Pacific and Mexican breeders are resident, but other populations are migratory, wintering from the southern United States to northern South America. It is a very rare vagrant to western Europe.

This bird was first observed in winter on the dunes near the town of Ipswich, Massachusetts.

Although this bird is generally abundant across its range, some coastal populations depending on salt marsh habitat are declining.

They form flocks in the winter to migrate.

Savannah Sparrow is a very variable species, with numerous races, several of which have been split as separate species at various times. The different forms vary principally in the darkness of the plumage, with Alaskan and interior races the palest, and southern Pacific coastal forms the darkest.

This species has a typically sparrow-like dark-streaked brown back, and whitish underparts with brown or blackish breast and flank streaking. It has yellowish or whitish crown and eyebrow stripes. The cheeks are brown and the throat white.

The Savannah Sparrows proper are very similar and migrant birds can not usually be related to a breeding population with certainty. The resident or partially migratory subspecies are well distinguishable by size and, particularly between groups, coloration.

The Ipswich Sparrow is somewhat larger and paler in colour than other eastern Savannah Sparrows. The breast streaks are narrower and pale brown. Some birds overwinter on the island; others migrate south along the Atlantic coast, usually departing later and returning sooner than mainland birds.

The breeding habitat is a wide variety of open habitats including grasslands and cultivation. Savannah Sparrows nest on the ground, laying 3-6 eggs in a cup nest sheltered by a clump of grass or other vegetation.

These birds frequently raise three broods in a year.

Some birds interbreed with P. s. savanna in Nova Scotia.

These birds forage on the ground or in low bushes. They mainly eat seeds, but insects are also eaten in the breeding season. The song is mixture of chips and trills. The flight call is a thin seep. 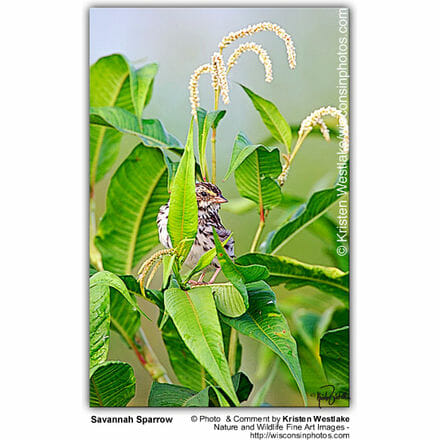 Seventeen subspecies are currently recognized. One was formerly considered a distinct species. Three additional subspecies are not generally accepted.

The subspecies are usually divided into several groups:

P. s. wetmorei is a doubtful subspecies which may breed in the mountains of Guatemala. It is known from only 5 specimens,collected June 11-17, 1897, in Huehuetenango Department