The Scarlet Ibises (Eudocimus ruber) are very closely related to the American White Ibises and these two are sometimes considered conspecific (one species).

The life span of Scarlet Ibis is approximately 15 years in the wild and 20 years in captivity. While the species may have occurred as a natural vagrant in southern Florida in the late 1800s, all recent reports of the species in North America have been of introduced or escaped birds.

The plumage is mostly bright red (“scarlet”), except for the black wing-tips.

Juveniles have a grey and white plumage. As they mature and ingest red crabs the plumage over time takes on the bright red coloration of the adult.

The Scarlet Ibises’ bright coloration is caused by the ingestion of red crabs caught in tropical swamps . 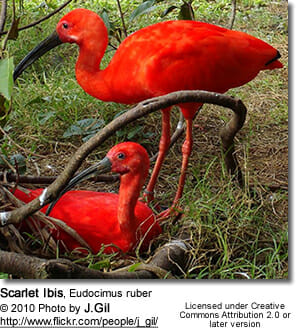