The Scintillant Hummingbird (Selasphorus scintilla) is a Central American hummingbird that occurs naturally only in the mountains of Costa Rica and western Panama, where it is typically found along brushy forest edges, in coffee plantations and occasionally gardens at altitudes from 900 – 2,000 m (2,952 – 6,562 ft) and moving up to 2,500 m (8,202 ft) outside the breeding season.

At higher elevations, this species is replaced by the related the Volcano Hummingbird (Selasphorus flammula). 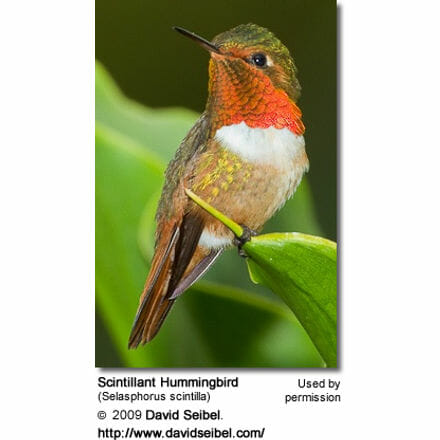 The Scintillant Hummingbird is the smallest hummingbird within its range – averaging only 6.5 cm or ~ 2.6 inches long. The male weighs about 2 g (0.07 oz) and the female averages 2.3 g (0.08 oz) . Their bill is black, short and straight.

The adult male has bronze-green upperparts. His tail is rufous and black-striped. His throat is bright red, separated from the cinnamon underparts by a white neck band.

The adult female is similar, but her throat is buff with small green spots. Her flanks are a richer rufous color.

Immature birds resemble the female but the have a rufous fringes to the upper plumage.

During the breeding season, the male perches conspicuously in open areas with flowers and defends his feeding territory aggressively with diving displays.

The female is responsible for building the cup-shaped nest out of plant fibers woven together and green moss on the outside for camouflage in a protected location about 1-4 m high placed in a scrub. She lines the nest with soft plant fibers, animal hair and feather down, and strengthens the structure with spider webbing and other sticky material, giving it an elastic quality to allow it to stretch to double its size as the chicks grow and need more room.

As is the case with other hummingbird species, the chicks are brooded only the first week or two, and left alone even on cooler nights after about 12 days – probably due to the small nest size. The chicks leave the nest when they are about 20 – 25 days old.

Scintillant Hammingbirds primarily feed on nectar taken from a variety of brightly colored, scented small flowers of trees, herbs, shrubs and epiphytes – favoring Salvia and Fuchsia. They use their long, extendible, straw-like tongues to retrieve the nectar while hovering with their tails cocked upward as they are licking at the nectar up to 13 times per second. Sometimes they may be seen hanging on the flower while feeding.

This hummingbird is generally quiet. Its call sounds like a liquid tsip.