The family of Scops Owls comprises 45 or more living species with more being discovered or rediscovered every few years.

They are amongst the smallest owls in existence – second only to the tiny Elf Owls.

As is typical of owls, Scops Owls are nocturnal (active at night) and primarily solitary.

These ” Old World owls” are differentiated from their otherwise similar New World counterparts – the “Screech Owls” – by their vocalizations.

The Scops Owl emits either a whistling call or a row of high-pitched hoots with less than four hoots per second.

The Screech owls were named for their piercing trills with more than four individual notes per second. 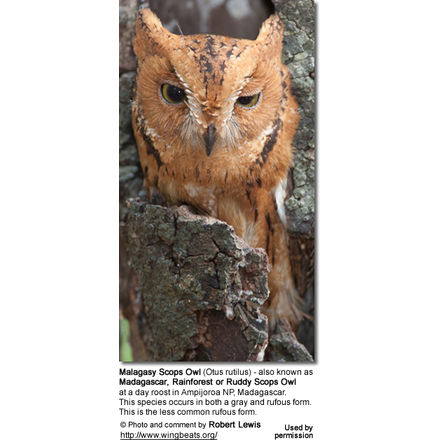 Scops Owls are restricted to the Old World – with most of them residing in Africa and southern Europe.

They have large heads, facial disks, ear tufts, as well as hawk-like beaks and claws. Their concealing plumage is patterned similarly to the bark of trees they perch on, allowing them to blend well into their environment.

The plumage is colored in various brownish hues, sometimes with a lighter underside and/or face. Some species occur in greyish- and reddish-brown morphs (genetic mutations).

Considerable geographic variations have been noted, with the northern races being larger but less heavily patterned than those found in the south.

Female Scops Owls are usually larger than the males of their species, with owls of both sexes being compact in size and shape.

Scops Owls are easily preyed on because of their small size. For this reason, they have developed some physical and behavioral adaptations that help them blend into their environment, thus remaining unnoticed to potential predators.

Their camouflaging plumage is one aspect; in addition to which they will stretch their bodies to look leaner and sway back and forth to appear even more like a tree branch moving in a breeze.

Their calls consist of a series of whistles or high-pitched hoots, given with a frequency of 4 calls per second or less, or a single, drawn-out whistle.

The calls differ between species in type and pitch. 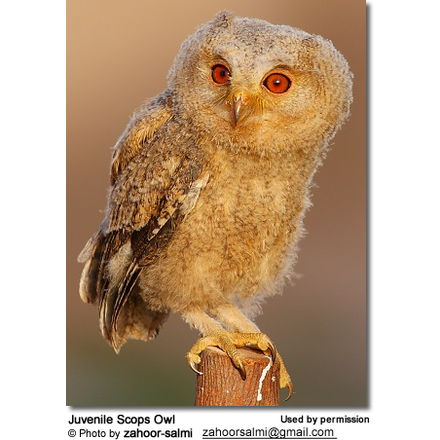 Scops Owls are monogamous with pair bonds that last through a breeding season. For the rest of the year, they are otherwise solitary.

On the onset of the breeding season, males will prepare nests (often nests excavated by other cavity-nesting birds); and the females will choose their mates based on the quality of the nesting cavity and food located inside.

Some species that typically nest in tree cavities have been observed to lay their eggs directly on the ground in areas where no suitable tree cavities were available.

The females alone incubate the eggs for 3 to 4 weeks, while the males bring food to nesting females and any young.

The hatchlings of most Scops Owls are altricial (= born naked) to semi-altricial (covered with some down). Fledging usually occurs when the young are 4 – 6 weeks old.

They generally only produce one clutch a season, but may initiate re-nesting soon after nest failure. 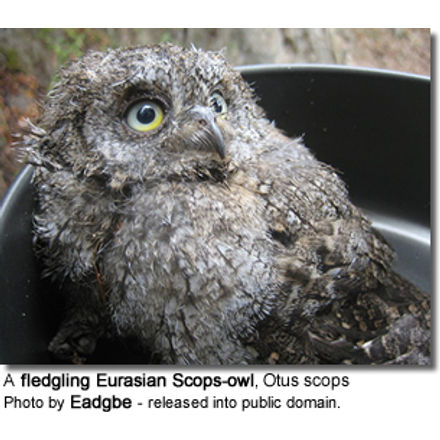 Scops owls are generally insectivorous feeding on a wide range of insects; however, depending on the species, they may take small birds, small mammals – such as bats and mice – as well as earthworms, amphibians and aquatic invertebrates.

Most hunting is done from an open perch in semi-open areas with old trees with hollows. When they spot prey, they drop down catching them either on the ground or flying insects are caught mid-air.

Their excellent sense of hearing and sight help them locate prey; and their well-developed raptorial claws and a curved bills, are efficient tools for tearing their prey into pieces small enough for them to swallow easily. 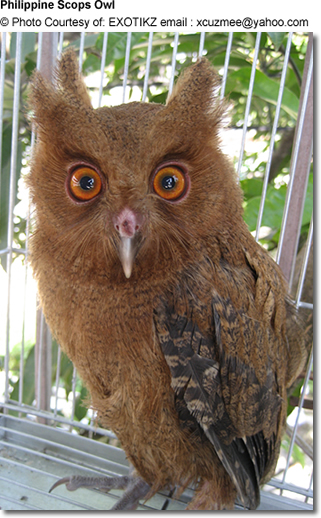