Scrub Jays (genus Aphelocoma) are strikingly handsome birds – with a mostly blue plumage, and black bills, legs and feet. Most of the Scrub Jay’s head is a rich deep blue (the top of the head, the nape, and the sides of the head).

Most of the Scrub Jay’s head is a rich deep blue (the top of the head, the nape, and the sides of the head). One species, the Unicolored Jay, is blue all over. Some species have a white stripe above the eye and dark ear feathers. The chest is also white or grey-white and the back is a grey-brown. Most species have a bright blue tail and wings.

Similar Species: These jays are easily confused with the common Blue Jay, but they lack the Blue Jay’s crest, are slightly larger and have a longer tail, as well as slightly shorter and more rounded wings.

The Scrub-jays occur naturally in western Central America, Mexico and the western United States – with an outlying population in Florida.

They are usually seen in open pine-oak forests, chaparral and cloud forests, as well as backyards, where they may take advantage of bird feeders. 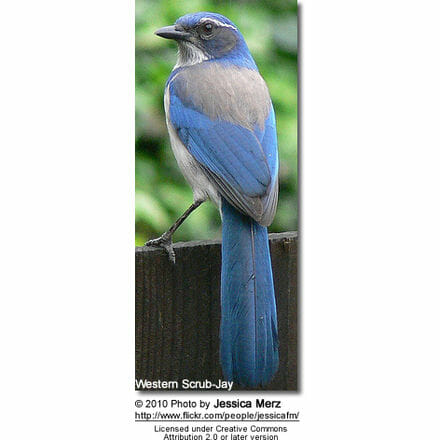 Their main diet consists of acorn and pine nuts, as well as insects and (bird) eggs as well as chicks. They will also eat small animals, such as frogs, mice and reptiles. Their diet also includes various winter grains, berries and other fruits. You might even see some standing on the back of large animals (such as deer) and picking off ticks and other parasites. The large mammals seem to appreciate their help and remain still while the jays feed on pesky parasites.

Outside the breeding season Scrub Jays usually forage in pairs, family groups, or small non-kin groups. They can be aggressive towards other birds; but can be very confiding with humans – in fact, they may willingly take food off a human hand, such as sunflower seeds or whole peanuts (shelled or in-shell). They are frequent visitors at campsites and picnics.

J.C. from Southern Oregon tells about his experience with these interesting birds: “The birds adopted us sometime last year and it’s been very interesting ever since. Not sure how to tell them apart but I’m sure it’s the male that eats out of my hand. We feed them baked peanuts unsalted. They seem to enjoy those plus the hoards of bugs they eat. The most interesting thing the Jays have done was yesterday. I go out early to feed them (the male anyway, the female has been gone for a few days. she does this from time to time) and the male grabs a peanut and flies into the tree where their nest is. I thought he was going to eat because he was cracking the shell open but instead of eating the nuts he broke them up and hid them in the tree. I watched him do this twice yesterday. These birds are absolutely incredible. We have “NO” other birds in our yard because of these two. They chase any and all birds away! I have not seen any bird stand up to these two. Its also because of these birds I quit using pesticides and lawn fertilizer. Last year they had two chicks.”

Scrub-Jays have been observed storing excess food in scattered caches within their territories. Their highly accurate memories help them recover their hidden caches, often after long periods of time. They have also shown the ability to plan ahead in choosing cache sites to ensure adequate food supplies when needed. They may even steal food from the caches made by other scrub jays and other birds. For this reason, jays are usually quite secretive when hiding their treasures.

Western Scrub-Jays specifically are known for their mischievous streak; as they steal and bury brightly colored objects.

Scrub jays are often quite aggressive at feeding areas, and are, therefore, often regarded as a nuisance. 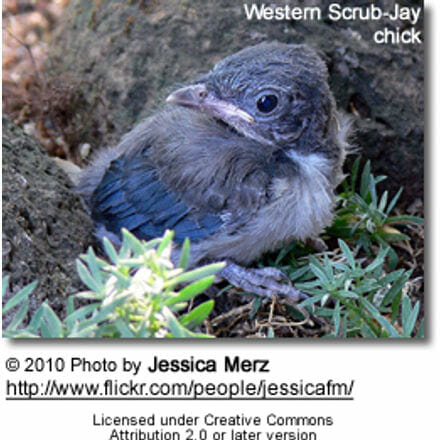 The Scrub Jays typically nest in trees or bushes. Their nests are compact and lined with animal hair, feather down and fine roots. The outer dimensions are usually about 30 cm – 60 cm (12 – 24 inches).

The average clutch consists of 2 to 4 eggs which are incubated for 14 to 17 days. The egg shell coloration varies depending on the species. They can be green with olive markings or a paler background of greyish-white to green with red-brown markings. The young fledge when they are about 18 – 20 days old. The young will typically remain with their parents for a year or two.

The Florida Scrub-Jay and the Mexican Jay have cooperative breeding systems that involve a permanently bonded monogamous pair and one to six helpers, which are likely to be their previous offspring.

Even though breeding can occur when they are about one year old, many of them will spend several years as nonbreeding helpers.

Some pairs raise their chicks alone, while most other pairs only have one or two helpers. Pairs with helpers tend to be more successful; and raise up to one and a half times more young than pairs without helpers.

Scrub jays are generally quite vocal with a wide range of possible sounds and calls. Their more common calls include a harsh sheek, sheek, sheeeeeek that may sound scratchy – typically used when they are aggressive — and a guttural churring krr’r’r’r’r. Softer “murps” or “clicks” may also be heard.