The Sharp-shinned Hawk (Accipiter striatus) is a small hawk. In fact, “sharp-shins” are the smallest to reside in USA and Canada, though some Neotropical species are smaller (notably the aptly named Tiny Hawk).

This species is widespread in North America, Central America, South America and the Greater Antilles. Below the distributions of the four groups (see taxonomy) are described as they roughly occur from north to south:

Adults have short broad wings and a long square-ended tail banded in blackish and grey (often narrowly tipped white). The remiges (flight feathers – typically only visible in flight) – typically only visible in flight) are whitish barred blackish. Legs yellowish. The hooked bill is black and the cere (soft skin surrounding the nostrils) is yellowish. The remaining plumage varies depending on group:

It occurs in a wide range of woodland and forest types, both dominated by conifers and by various types of broad-leaved trees (especially oaks)

The largest populations of the nominate group (see taxonomy) are thought to occur in the temperate boreal forests, but winter in warmer regions further south (see distribution).

The taxa suttoni, madrensis (both from the nominate group), chionogaster (White-breasted Hawk) and ventralis (Plain-breasted Hawk), are found in upper tropical to temperate highlands; mainly at altitudes of 300-3000 m (990-9850 ft), but occasionally down to near sea-level and up to 4000 m (13100 ft).

The taxon erythronemius (Rufous-thighed Hawk) is found in tropical and subtropical regions; both in lowlands and highlands.

These birds surprise and capture all their prey from cover or while flying quickly through dense vegetation. They are adept at navigating dense thickets.

The great majority of this hawk’s prey is small birds, especially various songbirds such as sparrows, wood-warblers and American Robins. Birds caught have ranged in size from a 4.4-g Anna’s Hummingbird to a 577-g (1.2-lb) Ruffed Grouse and any bird within this size range is potential prey.

Typically, males will target smaller birds, such as sparrows, and females will pursue larger prey, such as American Robins and flickers. They often pluck the feathers off their prey on a post or other perch. 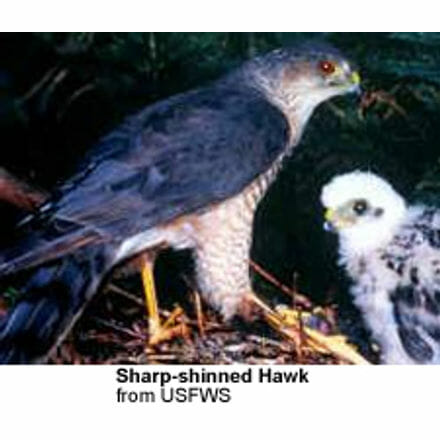 Sharp-shinned Hawks will construct a stick nest in a large conifer or dense group of deciduous trees. Clutches of 3 to 8 eggs have been recorded, but are usually 4 to 5 eggs. The eggs measure 37.6 x 30 mm (1.48 x 1.18 in) and weigh about 19 g. The eggs are prized by egg-collectors, because they are heavily marked with surprisingly colorful and varied markings.

The incubation period is thought to average at about 30 days. After hatching, the young are brooded for 16 to 23 days by the female, while the male defends the territory and catches food. The young fledge at about a month old and rely on their parents for feeding and protection another 4 weeks.

The nesting sites and breeding behavior of Sharp-shinned Hawks are generally secretive, in order to avoid the predation of larger raptors, such as the Goshawk and the Cooper’s Hawk.

While in migration, adults are sometimes preyed on by most of the bird-hunting, larger raptors, especially the Peregrine Falcon. The breeding behavior of the taxa chionogaster (White-breasted Hawk), ventralis (Plain-breasted Hawk) and erythronemius (Rufous-thighed Hawk) are comparably poorly known, but based on the available knowledge they appear to differ little from that of the nominate group.

In North America this bird declined in numbers in the 1960s and 1970s, probably as a result of the use of DDT and other pesticides. The population of USA and Canada has rebounded since and might even exceed historical numbers today. This is probably due to the combination of the ban on DDT and the proliferation of backyard birdfeeders in North America which create unnaturally reliable and easy prey for all Accipiters.

Migratory Sharp-shinned Hawks are one of the most numerous raptors recorded at “hawk watches” across the country. An exception is the subspecies from Puerto Rico, venator, which is rare and listed as endangered by the U.S. Fish and Wildlife Service. The remaining resident subspecies from the Greater Antilles, fringilliodes from Cuba and nominate (A. s. striatus) from Hispaniola, are uncommon, local, and, at least in the case of the latter, decreasing.

Both ventralis (Plain-breasted Hawk) and erythronemius (Rufous-thighed Hawk) are fairly common (but easily overlooked due to their secretive behavior) and presently considered safe. The situation for chionogaster (White-breasted Hawk) is potentially more problematic due to its limited range, although it, at least locally, remains fairly common.