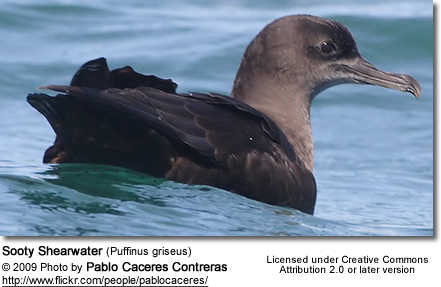 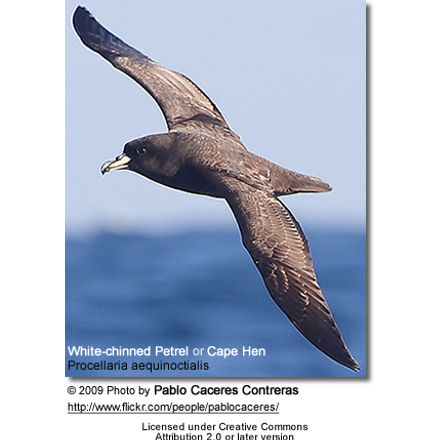 They are found on unfrozen oceans of the world, being most common in temperate and cold waters and rarely occur in tropical or even subtropical waters.

These marine birds spend their lives on the open ocean, except when breeding.

Many of them are long-distance migrants, literally flying to the opposite side of the world to reach their wintering grounds or breeding colonies. For example, the Sooty Shearwaters cover distances in excess of 8,700 miles (14,000 km).

They are generally drab colored; with sooty grey, brown or black upper parts and whitish underparts.

They have short legs, webbed feet, and large hooked beaks with tubular nostrils. 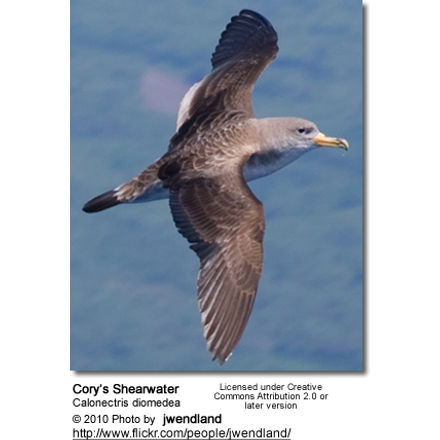 Shearwaters come to land (islands and coastal cliffs) only for the purpose of breeding. They typically return to those breeding grounds where they themselves were reared.

They breed in colonies – typically on remote islands and sea cliffs; however, several species nest inland.

Their courtship rituals may involve facing each other and calling; or complex series of circle flights over the nesting colony, in addition to calling.

Pairs may also exchange stomach oils. Some species (Fulmars) have developed the ejection of stomach oil as a defense mechanism; and are able to spit a stream of foul smelling oil 2 – 3 feet (60 – 90 cm) with great accuracy.

After courtship the Shearwater pair roost together.

They nest in burrows in the ground or in rock crevices. They lay a single chalky, white egg. If an egg is lost during the breeding season, they generally don’t replace it – like other bird species often to; but simply wait until the next breeding season comes around.

Both parents incubate the egg for about 42 – 56 days (depending on the species) and feed the chicks.

Initially, Shearwaters feed their young from oil collected in their stomachs (which is derived from the crustaceans in their food). Later on, the young receive partly digested food. The young fledge when they are about 84 – 140 days old, at which time they are generally abandoned by their parents.

Their primary technique for feeding is diving. Some species dive as much as 230 feet (70 m) under water and they can glide for more than one mile (1.6 km), skimming the surface of the water. They may also feed while floating on the water’s surface.

They will follow fishing boats to take scraps or – in particular the Sooty Shearwater commonly follow whales to feed on fish disturbed by them.

These communal feeders generally congregate wherever food is plentiful. While on land, most of them are nocturnal, remaining at sea until after sunset.

Shearwaters reach reproductive maturity when they are about 7 to 8 years old. Some species have a lifespan of 15 years or more.

The oldest known wild bird in the world is a Manx Shearwater that was ringed as an adult in 1953, when he was at least 5 years old) and was retrapped in 2003, making him at least 55 years old.

The greatest mortality occurs when they are nestlings or shortly after fledging. 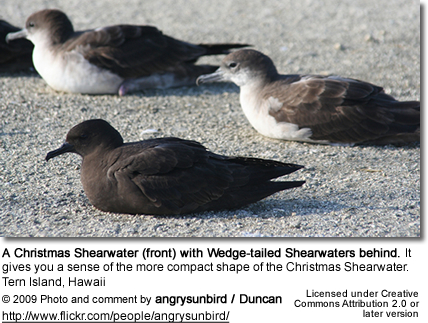