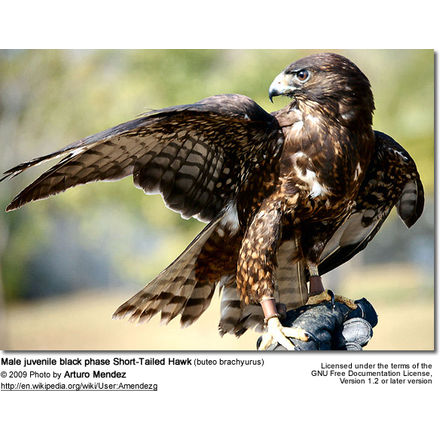 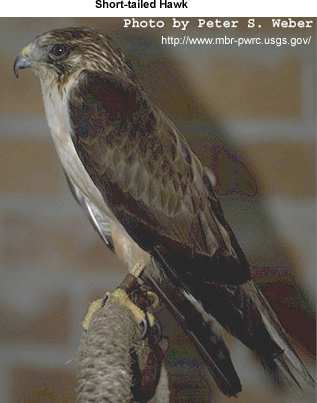 Short-tailed Hawk, Buteo brachyurus, is an American bird of prey in the family Accipitridae, which also includes the eagles and Old World vultures. As a member of the genus Buteo, it is not a true hawk and thus also referred to as a “buteo” or (outside North America) “buzzard”. The White-throated Hawk (B. albigula) is a close relative and was formerly included in the species B. brachyurus.

Short-tailed hawks breed in the tropical and subtropical Americas from southeastern Brazil and northern Argentina north through Central America to northern Mexico, as well as in southern Florida, USA. This species is generally found below 4,500 ft (c. 2,000 meters) ASL and most common below 2,500 ft (c.1,400 meters).

It is replaced by the White-throated Hawk (B. albigula) in the Andes of southern Colombia and south to central Argentina and Chile; the Short-tailed Hawk is found in the Cordillera Central and Cordillera Occidental of Colombia, while B. albigula occurs south of these locales[2]. As far as is known, B. brachyurus is a year-round resident except that most of the Florida population migrates in winter to the southern tip of the state, including the Keys.

Most of what is known about its natural history has been studied in the Floridan population, and might not apply to birds at the south of the species’ range. In general, this species is associated with woodland, often near water.

The Short-tailed Hawk is uncommon and local in most of its range. But due to its wide extent of occurrence, it is not considered threatened by the IUCN.

The large stick nest is built in a tree; in Florida the Bald Cypress (Taxodium distichum) is a popular nesting tree of the Short-tailed Hawk. Its 1–3 eggs prer clutch are white, usually with dark spots and blotches.

The Short-tailed Hawk is a small “buzzard“, about 16 in (40 cm) long with a 35-inch (90 cm) wingspan. Males average about 14 oz (400 g) and females approach 20 oz (over 500 g), but the size difference is slighter than in most birds of prey and the sexes are indistinguishable in the field. It has broad rounded wings, the tips of which are curved upwards while soaring, and a broad tail that despite the bird’s name is of average length for a buteo in proportion to the body. Its call is a high-pitched scream similar to other buzzards.

One of the most interesting things about this bird is the melanistic “black” phase – this species occurs in two colour morphs (genetic mutation), with no intermediates. The dark form predominates in Florida, where it is known as “little black hawk”. The light form is common elsewhere in the species’ range. In most of the North American buteos – e.g. the Red-tailed Hawk (B. jamaicensis) and Swainson’s Hawk (B. swainsoni) – melanistic individuals are known, although wholly black plumage is comparatively rare. Only in the North American population of Buteo brachyurus does it seem to be the prevalent form.

The adult light morph has dark brown upperparts. The underparts are white, except that the tail and flight feathers are grey barred with dark. The immature is similar to the adult but the face is streaked rather than white, and the tail bands are of equal width, whereas the adult has a broad bar near the tail tip.

The adult dark morph has black-brown upperparts and underparts, apart from the tail and flight feathers, which are grey barred with dark as in the light morph but possibly with darker grey. The young bird has the same tail pattern as the light-morph immature, and the underparts are spotted with white.

For a long time, it was thought that the dark phase of the present bird was a distinct species Buteo fuliginosus. For example, when Robert Ridgway discussed the Short-tailed Hawk collected at Oyster Bay, Lee County, Florida by W. S. Crawford on January 28, 1881, the question whether or not the black birds were of the same species as the light ones was not yet settled.

Its call is a high-pitched scream similar to other buzzards.

It apparently eats mainly smaller birds. Typical prey ranges from a New World warbler (Parulidae) to a bobwhite (Colinus) in size. In Florida, icterids – namely the Red-winged Blackbird (Agelaius phoeniceus) and the Eastern Meadowlark (Sturnella magna) – make up the bulk of the prey.

It also eats some frogs, lizards, large insects, as well as the occasional smallish mammal, such as a rodent. Among the heaviest prey recorded are young Common Marmosets (Callithrix jacchus) and similar small monkeys; these do not seem to form an important prey item however, and are only snatched when the opportunity presents itself.

The Short-tailed Hawk hunts from soaring flight, often at the borders between wooded and open areas. A frequent maneuver is “kiting” – coming to a stop, the bird heads into the wind, with its wings held stationary. It typically attacks prey with a nearly vertical swoop, sometimes pausing and then continuing downward in a “stair-step” manner.