A shrike is a passerine bird of the family Laniidae which is known for its habit of catching insects, small birds or mammals and impaling their bodies on thorns. This helps them to tear the flesh into smaller, more conveniently-sized fragments, and serves as a “larder” so that the shrike can return to the uneaten portions at a later time.

A typical shrike’s beak is hooked, like a bird of prey, reflecting its predatory nature.

Most shrike species occur in Eurasia and Africa, but two breed in North America. There are no members of this family in South America or Australia.

Some shrikes are also known as “butcher birds” because of their habit of keeping corpses. Australasian butcherbirds are not shrikes, although they occupy a similar ecological niche. 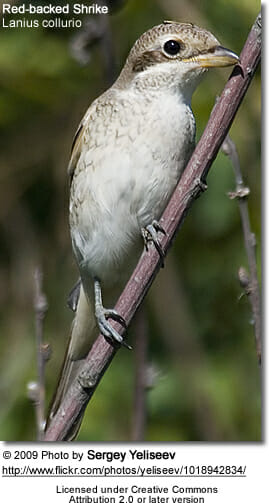 Other species, popularly called “shrikes,” are in the families: