The Shy Albatross or Shy Mollymawk, Thalassarche cauta, is a medium sized albatross that breeds off Australia and New Zealand‘s sub-Antarctic islands and ranges extensively across the Southern Ocean. Some authorities call this species the White-capped Albatross. 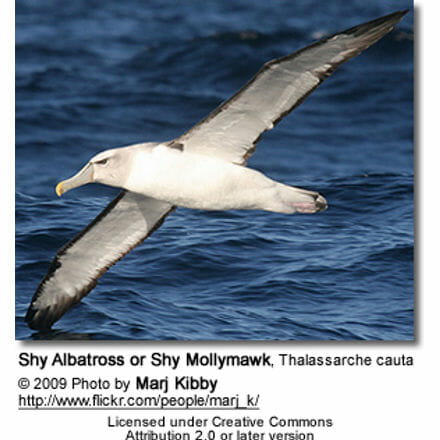 It is a black white and slate-grey bird with the characteristic black thumb mark at the base of the leading edge of the underwing. Adults have a white forehead and a crown, which is bordered on the bottom with a dark eyebrow and pale-grey face.

Its mantle, tail, and upperwing are grey-black, and the rest is white. Its bill is grey-yellow with a prominent yellow culmen (= external ridge along the outer part of the centre of the upper bille, formed where the two halves of the mandible join) and yellow tip. 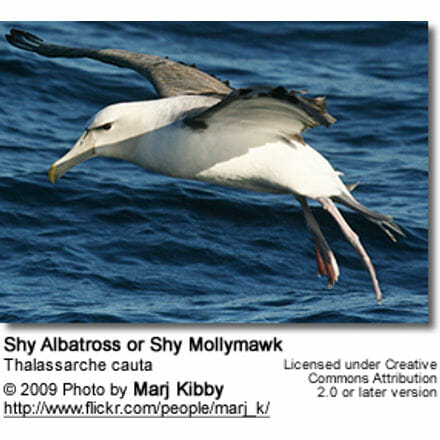 The Shy Albatross is endemic to Australia and it breeds on three island colonies; Albatross Island, Pedra Branca, and the Mewstone. During the breeding season, adults concentrate around southern Australia and Tasmania.

Juvenile birds are known to fly as far as South Africa; otherwise, non-breeding birds can be found throughout the southern oceans, but specifics are hard due to their similarity to the other species. It is sometimes found off the Pacific coast of the United States.

The Shy Albatross breeds on rocky islands and build a mounded nest of soil, grass, and roots. They lay one egg in the second half of September. 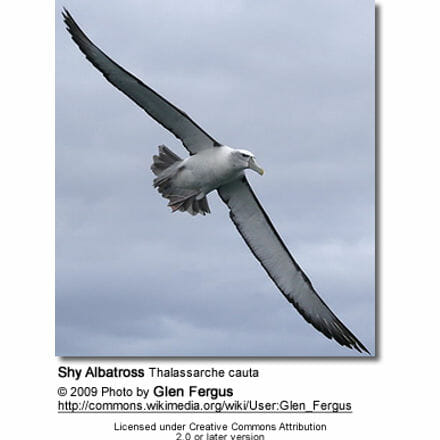 The Shy Albatross feeds by a combination surface-seizing and some pursuit diving – it has been recorded diving as deep as 5 m (16 ft). Fish, cephalapods, crustacea, and tunicates are the subsistence for this species.

Today, longline fishing still impacts this species but their numbers are maintaining through this threat. They also have had an avian pox outbreak on Albatross Island that has impacted their numbers slightly. Finally, the Australasian Gannet, Morus serrator is the primary threat to their survival.

In 1998, Robertson and Nunn, suggested a four-way split including the White-capped Albatross, Thalassarche steadi. The three-way split was accepted by Brooke in 2004, the ACAP (Agreement on the Conservation of Albatrosses and Petrels) in 2006, American Ornithologists’ Union (SACC) in 2008, and BirdLife International by 2000.

James Clements seems to be the last major holdout on the three-way split. The fourth split, steadi, was only accepted by the ACAP (Agreement on the Conservation of Albatrosses and Petrels) in 2006, and BirdLife International in 2008.

Finally, following Brooke, this species was shifted from Diomedea to Thalassarche, which was generally agreed upon by most experts.